Abby Lewis, a senior, and Morgan Hose, also a senior, were selected as the two Students of the Month for May by the Austin Noon Kiwanis Club.

Lewis has been a member of the Kiwanis Key Club since her sophomore year, which provides high school students opportunities to serve, build character and develop leadership skills. 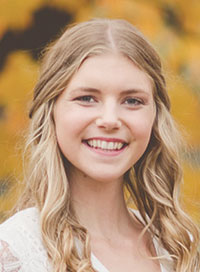 Her academic experience at AHS has been “full of support from all of my amazing teachers I’ve had over the years.” She has been taking majority honors level courses that challenge her academically, and has taken around 16 college credits while in high school, and received a 4.0 GPA average in those classes. She has been a member of the National Honors Society for the last two years.

Lewis had qualified for the state cross country individual meet during all four years of her high school career and received a wide array of Big Nine All Conference honors, has been selected Academic All State and was named a captain in the three sports she competed in. She was also part of the basketball team this year that qualified for the state tournament for the fourth time in school history.

Other activities Lewis has been involved in have included LINK crew, band and pep band. She will be receiving her scarlet cord for volunteering in the community over 160 hours from her freshman through senior years. She also volunteered at Sunday school at Our Saviors Lutheran Church, bell ringing for the Salvation Army, selling peanuts for Kiwanis’ main fundraiser, CHIP program for Habitat for Humanity, various blood drives, preschool registrations and Paramount ticket sales.

Next year, Lewis plans to attend the University of Wisconsin-Eau Claire and run cross country and track. She plans to major in the healthcare field. She credited much of her success and ambition to her parents.

“My parents have had a positive impact on me because they are always so supportive throughout everything I do,” she said. “Whether it’s athletics, academics or life, I know that I can count on them to be there for me.”

A member of the Kiwanis Key Club since her sophomore year, Hose has been selected as one of the two Students of the Month. 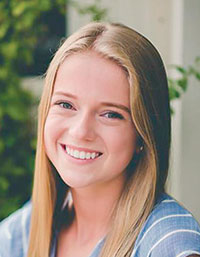 Hose plans to attend the University of Wisconsin- La Crosse to double major in political science and communications with a minor in business law. Eventually, Hose plans to take her LSATs and go to law school.

“My academic experience has been nothing but substantial at Austin High School,” she said. “I was lucky enough to be able to be given an education that has prepared me not only in my curriculum, but also in the real world.”

Hose has taken honors and AP core classes, Spanish I-IV, choir, band, gym and health and is a graduate of the Mower County CEO Program.

As for notable influences on her life, Hose stated that Tony Einertson, her teacher, was someone who positively affected her.

“Many people have influenced my life in one way or another, but one person I’d like to acknowledge is Tony Einerston for having a notable positive impact on me,” she said. “Not only was he my teacher for a year and a half, but he was also my coach and mentor. He taught me many things both inside and outside of the classroom that have shaped me into the person I am today, and I can’t thank him enough for that.”