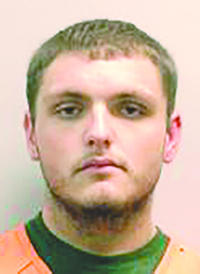 Dakota Ray Janning, 22, of Austin was sentenced to 20 years of probation for felony third-degree drugs-sale of a narcotic on Thursday in Mower County District Court.

A second charge of felony third-degree drugs-sale of a narcotic was dismissed as part of a plea agreement reached on Dec. 28.

Court documents state that narcotics officers met with a confidential reliable informant (CRI) about purchasing methamphetamine from Janning on Aug. 6, 2018. The CRI and his vehicle were searched and police provided him with buy money and an audio transmitter. Police then monitored him as he met Janning near the dog park and purchased 0.30 grams of methamphetamine from him.

The CRI arranged another purchase on Aug. 8. He and his vehicle were again searched and he was provided more buy money and an audio transmitter. The CRI was then monitored as he was picked up by a vehicle in the area of Sixth Street and First Avenue Southwest and dropped off at a residence, where he purchased 5.93 grams of methamphetamine from Janning.

After both purchases, the CRI surrendered the methamphetamine to police.

In addition to probation, Janning must also perform 80 hours of community service, follow 17 conditions and pay $5,085 in fines. Failure to follow the conditions could result in 27 months in prison.

The goals that Angela Himebaugh and Rebecca Wolterman had when they became co-chairs of the Adams Booster Club in 2017... read more