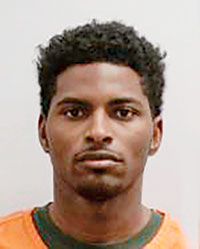 According to the court complaint, police responded to a domestic assault call at 9:01 p.m. on Feb. 5 in the 1100 block of Fourth Street Northwest. They made contact with the victim, a female who was coughing due to a strangulation episode. She said she was assaulted by Watkins. The woman was transported to the hospital because of her continuous cough.

At the hospital, the victim told police she had children with Watkins and that he had been at her residence trying to reconcile their relationship, though she was not interested. She said Watkins had spent the night on Feb. 4 and had left that afternoon, but called and continued trying to reconcile. She told him not to come by the residence again. Later that night, she heard a noise coming from the children’s bedroom and saw Watkins in the hallway when she went to investigate. He again tried to get them to reconcile and became upset when she declined.

The victim then told police Watkins threw her against a coat rack, then got behind her and put both hands around her neck. She said could not breathe and thought she would pass out. She was able to escape his grip, at which point she said he grabbed a knife and told her he was going to kill her. He eventually dropped the knife and placed her in a chokehold as she attempted to open the door, again making her feel like she was going to lose consciousness. He eventually let go and she was able to get out of the residence. She said Watkins attempted to drag her back into the residence, but failed to do so, after which he left.

A neighbor told police he had seen the victim fighting with a black male outside the residence.

Police spoke to Watkins at his residence in the 1400 block of Eighth Avenue Northwest. Watkins said he had been at the victim’s residence earlier that day, but there had been no arguments. He said he and the victim had been arguing through text messages, though he refused to show police his phone.

The victim called police again at 6:17 a.m. on Feb. 6 and reported that Watkins came by unannounced and attempted to take the children. He left after the victim told him no. The victim also reported Watkins acted like nothing had happened the previous evening.

A review of Watkins criminal record shows prior convictions for domestic assault and violating a domestic abuse no contact order.

Watkins will appear in court again on June 24.

One of The Hormel Institute, University of Minnesota’s highest achieving scientists, Dr. Yibin Deng, will be promoted to full professor... read more