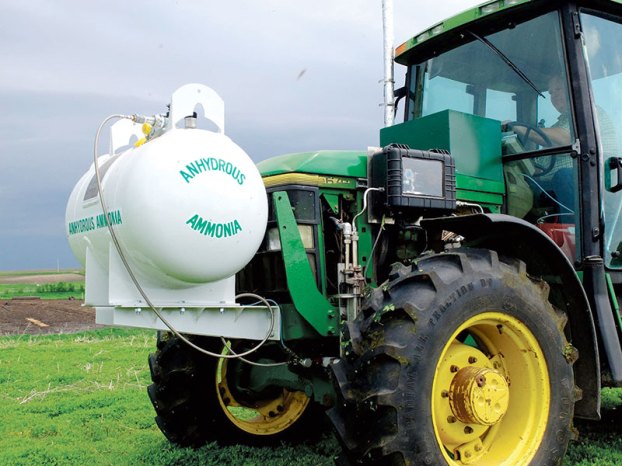 An experimental tractor designed to run on diesel fuel and ammonia is field tested on June 4, 2019, near Morris, Minnesota Dan Gunderson/MPR News

A John Deere 6400 tractor rumbled through a University of Minnesota Morris research field earlier this month pulling a chisel plow and making some history.

Nearly everything about this tractor is a common sight here in west-central Minnesota. But this particular farm country workhorse is one of a kind: It has a white tank mounted on the front labeled “anhydrous ammonia,” and extra pipes and control boxes attached to its engine.

But on this tractor, the fertilizer has become the fuel. It’s running on a blend of 70 percent diesel and 30 percent ammonia — and researchers hope this carbon-cutting technology will eventually become a cost-effective option for farmers. It’s part of a larger effort by U of M researchers to reduce the carbon footprint of agriculture.

“It’s amazing to see it working. I’m excited to continue doing some of this research and refining this system,” said Will Northrop, director of the U of M’s Thomas E. Murphy Engine Laboratory in Minneapolis.

Northrop has spent months working on this technology in the lab, but on that field in Morris, he watched the modified diesel tractor at work for the first time. He and his colleagues are confident the system will eventually be able to replace at least half of the diesel fuel that typically powers a tractor, cutting back on the harmful greenhouse gas emissions that have long been a byproduct of agricultural production.

“Essentially, you’re cutting 50 percent of the carbon emissions from the engine, so that’s really a huge advantage,” said Northrop. “It’s something that you can’t really do with any other technology like engine efficiency improvements or other interventions.”

Northrup had the idea to use ammonia as fuel for years, but wasn’t able to test the concept until he was able to secure funding a couple of years ago by the Legislative-Citizen Commission on Minnesota Resources, a committee of legislators and citizens that makes funding recommendations to state lawmakers on projects that benefit Minnesota’s environment and natural resources.

The ammonia-fueled tractor is one piece of a larger research project at the university that’s trying to reduce the carbon footprint of agriculture by making the ubiquitous ammonia fertilizer using wind energy. Most ammonia is now manufactured using natural gas, which can create the high temperatures needed to trigger the chemical reaction that results in ammonia. But natural gas is a fossil fuel, and burning it generates significant greenhouse gas emissions.

For about a decade, researchers in Morris have been developing a process to make ammonia with wind power, a process with almost no greenhouse gas emissions. They think it’s realistic to envision a series of regional, wind-powered ammonia production facilities in farm country.

The infrastructure to move and store ammonia is already in place. While ammonia doesn’t burn well, farmers are used to handling it. So, the challenge was to design a system to turn the ammonia into a more efficient fuel.

Northrop and graduate student Seamus Kane developed a catalytic converter that uses the heat generated by the running engine to kick-start the chemical process that converts ammonia to hydrogen, a fuel that burns efficiently but is difficult to store and transport.

That efficient fuel conversion using waste engine heat is the breakthrough technology that makes it all work. In theory, ammonia could replace 90 percent of the diesel fuel that’s typically used to run a tractor, but that might not be practical without emitting some ammonia in the exhaust, and since ammonia is toxic, safety is a primary concern.

“We need to be able to have a catalyst system that’s efficient enough to turn the ammonia back into hydrogen so that we can burn all the ammonia and get all of that fuel energy out of it before it reaches the exhaust,” said Kane.

The ammonia system works most efficiently when the engine is working hard, generating a lot of heat and efficiently turning ammonia to hydrogen. Northrop says engines running for hours in the lab on ammonia fuel showed no signs of unusual wear or loss of power.

Scaling up, from the turbine to the field

The wind-to-ammonia system in Morris has yet to be scaled up to a size that could provide regional distribution of ammonia. A tractor engine modified to burn ammonia could use the fertilizer that farmers are already using on their fields and may already have in storage tanks, but the ultimate goal is using a wind-produced ammonia fuel.

WASHINGTON — President Donald Trump boasted with abandon in launching his 2020 re-election campaign, overreached in excoriating his critics and... read more