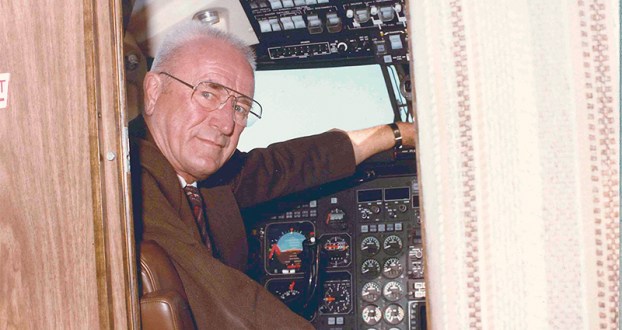 Hormel Foods Corp. Glenn Hovland is pictured in the cockpit toward the end of his career. Hovland is part of the Minnesota Aviation Hall of Fame’s 2020 inductees. Photo provided

Austin’s Airman; Glenn Hovland to be inducted into state Aviation Hall of Fame

A lifetime aviator and Austin man will be honored posthumously by the state for his contributions to aviation next spring.

For those who knew Glenn Hovland, he was the first chief pilot for Hormel Foods Corps from 1961 to 1982. He was an airman for the Army Air Corp in 1942 and had taught countless others how to fly. Hovland started the Austin Aero Service, and was also under contract with Winzen Research to track high-altitude balloons.

Through newspaper articles, magazine clippings, photographs that Hovland took personally, as well as footage, his adventures through the sky were more than enough to land him in the Minnesota Aviation Hall of Fame’s class of 2020 inductees. Hovland passed away in 1994.

The Minnesota Aviation Hall of Fame is a nonprofit corporation, recognized by the State of Minnesota as a way of honoring pioneer and historic aviation individuals in a lasting and significant way, according to its website. It’s a way for state residents to learn about the aviators and how they contributed to the field.

It wasn’t until this past spring that Glenn’s family received notice of the honor. Three of his eight children: John and Bruce Hovland, and sister Kaaren Wuertz, started digging into their father’s past and learned even more about Glenn’s adventures in far-off places. Those excursions included flying political figures like vice president Hubert Humphrey, flying Miss America,  and chasing after high-altitude balloons during the precipice of the space program reminiscent of Joe Kittinger’s death-defying skydive from a similar balloon 100,000 feet in the air. 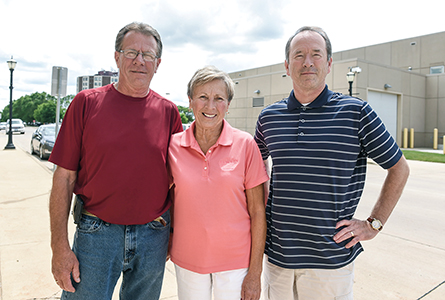 Siblings Bruce Hovland, from left, Kaaren Wuertz and John Hovland came together Wednesday to talk about the life of their dad Glenn Hovland who was recently indcuted into the Minnesota Aviation Hall of Fame’s 2020 inductees. Eric Johnson/photodesk@austindailyherald.com

Also, the family didn’t know about the Minnesota Aviation Hall of Fame until an Albert Lea pilot who flew with Glenn and sat on the board told them that their father should be nominated.

“We should have done this 20 years ago when Dad was still alive,” Bruce said. “There wasn’t a lot of people left who knew who he was and what he did.”

It became clear that many of the people who knew Glenn were gone. Not many people were left from his lifetime that remembered what he did for Austin and Hormel Foods and could testify on his behalf for the honor. So, the siblings were left with the difficult task of tracking down people who could write a letter for Glenn’s nomination.

However, John was able to draw attention for letters by reaching out to community members through social media.

“Facebook is a wonderful thing,” he said, stating that he was able to receive a letter from Richard and Nancy Knowlton. Richard who recently passed away, had been one of the CEOs and presidents of Hormel Foods that  Glenn flew across the nation.

“There was never a person who flew with (Glenn) who didn’t feel Glenn would get them to their destination, safe and sound no matter what,” the letter read. “Glenn could handle any problem, and God knows he did just that. He was such a warm and caring man, and he knew airplanes in and out.” 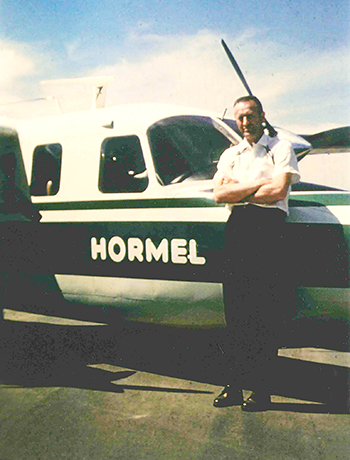 Glenn Hovland standing with one of the planes he flew. Photo provided

Often, when the Hovland children spoke about their father, they immediately honor their mother Bernice, who often took care of her eight children all while running a 160-acre farmstead outside Austin while Glenn was off flying for his career. Bruce noted that she always “rolled with the punches.”

“We grew up on a farm that was four miles north of Austin,” he recalled. “It was in perfect alignment with the airport runway at the time. We would drive a tractor in the fields, and dad would drop in low and scared the daylights out of us. It was pretty funny.”

There were far too many untold stories that the Hovland children never knew about, as Glenn’s humility resulted in him not speaking much about his service or his adventures frequently. However, his children are excited for the formal induction to take place in April 2020, where his memory could at long last be remembered and his accomplishments shared with Minnesota.

“That was dad,” Kaaren said. “It wasn’t really a surprise to us older kids about how much he did.”

When asked how they would believe their father would have reacted to being inducted into the Minnesota Aviation Hall of Fame, John paused for a moment and then laughed.

“We are definitely proud of him,” Bruce added.

‘Like a new house’; Bella Victoria opens in new location

After closing its old location at 210 Fourth St. NE on May 25, Bella Victoria Italian Cuisine finally got the... read more