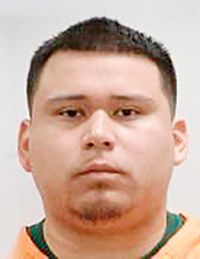 Edbin Jose Coreas, 24, of Austin was charged with felony violent felon in possession of a firearm, gross misdemeanor second-degree DWI-refuse to submit to chemical test; blood or urine as required by search warrant and misdemeanor open bottle law on Monday in Mower County District Court.

According to the court complaint, a Mower County deputy observed a 2005 Dodge Dakota pull out of the Rodeway Inn parking lot at a high rate of speed at 11:27 p.m. on Dec. 20, 2018. The Dodge drove into the ditch between Highway 218 and Rodeway Inn, then backed up and turned south on a short frontage road near the Shell gas station. It then accelerated, squealed the tires and drove across Highway 218 into the National Guard Armory parking lot and into the Austin Airport parking lot. The Dodge then slowed near a building and the deputy believed something was thrown from the vehicle. The deputy initiated a traffic stop and the Dodge pulled into a parking spot.

Coreas exited from the driver side and Cham Obang Oman, 24, exited from the passenger side. The deputy asked Coreas about his driving behavior and was told the vehicle “slipped on some ice.”

More law enforcement arrived on the scene and the deputy noticed Coreas had slurred speech, watery eyes, and smelled of alcohol and marijuana. Coreas claimed he had two drinks, but denied using drugs. When asked to perform field sobriety tests, Coreas got upset, but eventually agreed. He failed to follow instructions and became argumentative and was placed under arrest.

The deputy told other law enforcement he suspected something had been thrown from the vehicle near one of the buildings, and a black 9-millimeter handgun was found nearby. A magazine with six rounds was found inside and the serial number matched that of a handgun reported stolen on Nov. 7. The deputy noticed Oman was acting nervous, watching the officer while he searched. Oman, who is ineligible to possess a firearm due to a prior assault conviction, denied throwing the weapon from the vehicle. He was also placed under arrest.

A plastic cup containing alcohol was found in the center console of the Dodge.

While at the Mower County Jail, Coreas refused to submit to a blood or urine test despite law enforcement obtaining a search warrant to issue the test. The Dodge was forfeited due to Coreas having a prior DWI conviction.

When asked about the handgun, he denied knowing anything about it.  The handgun was sent to the Bureau of Criminal Apprehension lab for analysis. On Feb. 7, the BCA notified law enforcement that Coreas’ DNA was found on the handle and magazine release of the handgun.

According to the court complaint, deputies responded to a noise complaint on Aug. 5, 2018, in the 400 block of Sixth Street Southwest. At the same time, police had responded to Mayo Clinic Health System-Austin on a report that a male had been shot in the leg. Upon arrival, they saw Coreas and Oman sitting on the front steps of the residence. When they informed them about the complaint, Coreas got up and quickly walked to the north side of the residence. The deputies then heard a loud noise and one of the deputies went to where Coreas had gone.

The other deputy spoke to Oman and observed firearm ammunition on the staircase he was sitting on.  Oman denied the ammunition belonged to him. Residents of the house then came out and began arguing with the deputy.

The second deputy came around front with Coreas. The other deputy asked if the sound they heard was him getting rid of a gun, to which Coreas replied, “What gun?”

The deputies tried to detain Coreas, but he pulled away and told the residents to grab the ammunition. Coreas was placed in a squad car and the deputies searched the area for a gun.

Due to thick plants and brush, the deputies called in a K9 unit, which located a Taurus PT 111 pistol a few feet from where the deputy located Coreas. The safety was set to “fire” and the magazine was empty.

A resident at the house said she had seen Coreas with the ammunition.

Coreas will appear in court again on June 17.

How young is too young to be suspended from school?