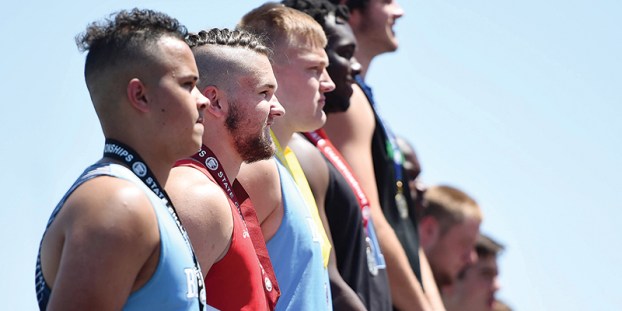 Austin’s Oliver Andersen stands with the rest of the podium after finishing sixth in the discus Saturday at the Minnesota Class AA State Track and Field Meet at Hamline University in St. Paul. Eric Johnson/photodesk@austindailyherald.com

ST. PAUL – Austin junior Oliver Andersen shook off an early miscue to finish on the podium, while senior Dongrin Deng fought off an injury to compete at the Minnesota Class AA State Track and Field Meet at Hamline University Saturday.

Andersen’s first throw of the day sailed off to the left and over the fence, but he rebounded to put up throws of 151 feet, 11 inches and 150-2. Andersen didn’t break 150 in the finals, but his throw of 151-11 was good enough to land him in sixth place at his first ever state meet.

“I was super excited to be here and had a little too much energy on the first throw,” Andersen said. “It was kind of nice to have my first throw be my worst throw, because you can’t get much worse than throwing it into the parking lot.”

Andersen has thrown before at Hamline University having competed in the elite meet earlier this season, but he still felt some nerves as he took the field at Hamline Saturday. 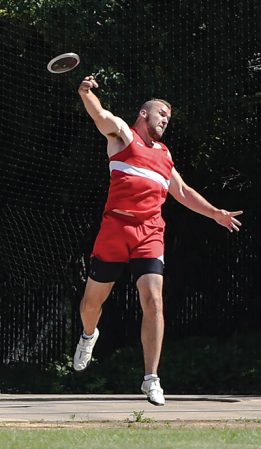 Maxwell Otterdahl of Rosemount took first with a throw of 191-4 coming on his final toss and Yakob Euoke of Hopkins took second with a 176-5. Four of the throwers at state threw more than 160 feet.

“I’m just glad that I’m starting to consistently get over 150. That was kind of a benchmark goal for me. For me to place at state is pretty exciting,” Andersen said. “I want it to improve a lot next year and hopefully come back and do pretty well.”

Deng was in crutches a week ago after he sustained an injury while qualifying for state, but he was able to land a jump of 16 feet, seven inches on his first jump to put him in 17th place in the long jump. Deng, who scratched on his other two jumps, was in his first year of track and field this season.

He’s glad he was able to fight off the injury and find a way to compete.

“It was a lot of hard work. I had to ice it a lot and I had to do whatever I could to get ready,” Deng said. “There’s a lot of good athletes out here and it’s a wonderful experience that I’ll always treasure.” 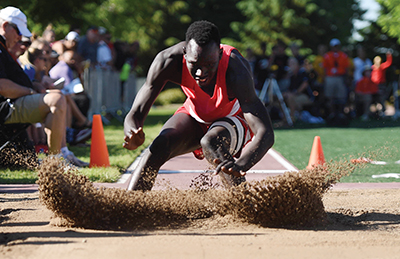 Deng has committed to play college basketball at Dakota College, a Division I NJCAA school in Bottineau, North Dakota next season and he said competing in long jump has given him a boost in athleticism.

“I think I’m more athletic more and I think I know my body more,” Deng said. “I built up my pain endurance and it was a terrific test. I wasn’t sure if I was going to be able to jump or not and I’m glad I decided to do it.”

Deng will play in the MonDak conference and he will likely face off against his former teammate Medi Obang, who will play at Lake Region College, as well as Austin grads Duoth Gach and Moses Issa, who will likely play at North Dakota State College of Science.

Dante White of Wayzata won the long jump with a distance of 22-5.

CRWD to lead walk through Austin Mill Pond’s past

Austin Mill Pond’s major changes over the past 170 years will be covered Monday evening during a History Happy Hour... read more