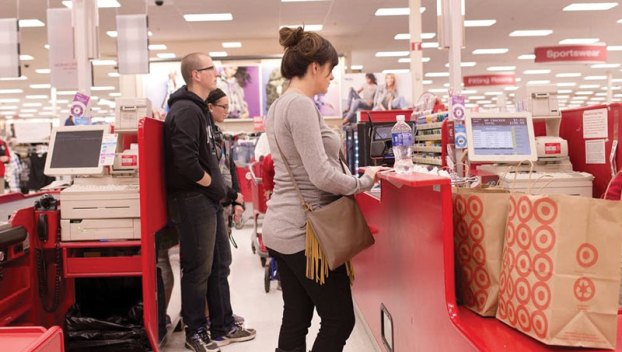 Jenny Kipka waits at the checkout line at Target in Roseville in September 2015. Target’s operations suffered from a one-two punch of technology difficulties that slowed transactions over the weekend, but analysts say little backlash is likely. Matthew Hintz/MPR News

Analysts: Fallout from Target tech stumble likely to be brief

Target is recovering from a weekend of computer glitches at its stores that forced employees to scramble and shoppers to abandon carts. But analysts say it’s not likely to cause long-term problems for the Minneapolis-based retailer.

Do you remember when almost exactly five years ago, Target had computer problems at its registers resulting in major delays?

“I think the only ones who will remember are the people at Target and maybe the media who covered it the first time,” said Bob Amster, principal at Retail Technology Group, the consulting firm that works with companies like Target on their IT systems. Target is not one of his clients, but he said Target doesn’t have much to worry about.

“Most customers won’t remember. They may not remember after one year,” he said.

Or, even one day?

Retail analyst Joe Feldman said he and some members of his team at Telsey Advisory Group observed normal, busy operations at stores on Sunday, when a vendor’s technology problems slowed some operations for a second day in a row.

“You just want to make sure it’s not a data breach or security breach or something like that,” Feldman said. “Clearly that was not the case here. You know, it might blow over pretty quickly, it seems.”

Target didn’t respond to requests for comment and hasn’t released any more details about the incident. There were plenty of complaints on social media over the weekend, but people also reported that store employees handled things well under pressure.

Most customers are understanding, said Feldman.

Target’s share price closed down eight-tenths of a percent.

For retail analyst Brandon Fletcher with the money management firm Bernstein, the Target incident was a reminder that a lot of retailers are trying to improve their technology to increase speed and beef up security.

“The truth is there are just so many systems that talk to each other across so many stores that even when you’re doing a relatively simple update, things go down,” Fletcher said.

Fletcher said Target handled the situation well, especially given all the major retailer data breaches in the past.

“That’s really why they were so quick to go, ‘this is a small outage, we know it’s super frustrating, we’re sorry. It has nothing to do with the super scary horrible problem of your data being leaked,’” Fletcher said. “As long as that rings true over the next couple of weeks, this will all fade.”

Rain leaves veggie farmers struggling with no aid in sight