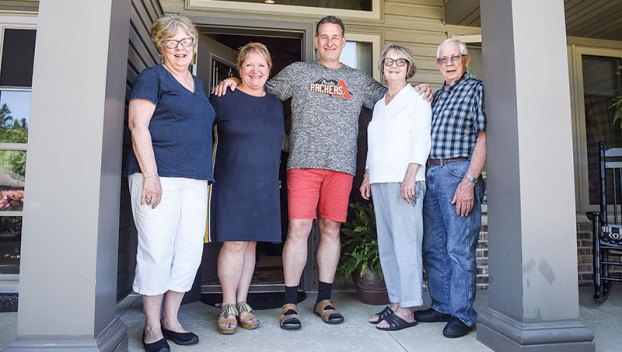 William Bell and his wife Mavis, right, welcomed Albert and Harriette Schaart of Holland into their Austin home recently. The Dutch couple have been tending to the grave of William’s brother Marion, who died during World War II while serving in Europe. Also pictured is Lynda Little, left, who is Marion’s daughter. Eric Johnson/photodesk@austindailyherald.com

“My mother, father and I got up that morning and my mother turned the radio on,” said Marion’s younger brother, William Bell, who was in school at the time. “They said it was the biggest raid on Berlin up to that point in the war, and my mother sensed it right away. It’s like she knew what happened.”

The family knew the bomber had gone down, but Marion was listed as missing before being declared killed in action.

“I always wondered what actually happened,” Bell said. “These big bombers would just fall out of the sky. He was a ball turret gunner and I had heard many stories about how some couldn’t get out of the turrets and about planes coming back with the landing gears gone and the gunners getting crushed.” 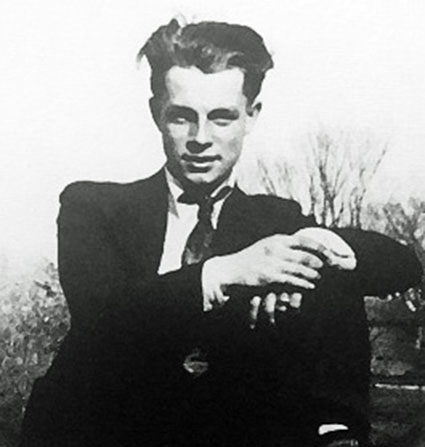 But Bell, along with Marion’s daughter Lynda Little, learned the truth thanks to the efforts of Albert and Harriette Schaart, the Dutch couple who cares for Marion’s grave in the Netherlands American Cemetery in Margraten.

“Our neighbor had adopted a grave in Margraten at the American Cemetery,” Herriette said. “He was getting old, so he said, ‘I want to pass them over to the next generation, would you take it over?’ (Albert) was always interested in World War II and said he wanted to do it. We got a name, Marion Bell, and we went to search on the internet to find out more about the name.”

“I was interested in the person behind the name,” Albert said. “I wanted to find out more about the man who died for our freedom. I thought maybe I could get in contact with the family and get more information about him. First, I sent an email to the (Mower County) Historical Society to see about getting information there. I typed in ‘Bell’ on Facebook and I got in contact with Bill’s grandson. That’s how it all started.”

Little was several months away from turning two when her father was killed. She has no recollection of him, only what her mother and other relatives have told her.

“They thought his plane was shot down on a return trip from Berlin to England,” she said. “The story has changed thanks to Albert. He found out the truth, which we didn’t have. We were assuming a lot of things.”

“I found a report of the War Crimes Commission,” Albert said. “They recorded stories from eyewitnesses who saw the plane when it came down after it was hit by flak. It landed on the beach of the island of Texel in the North Sea. The crew came out of the airplane and stood on the wings. The eyewitnesses stated the Germans shot them off the wings.”

Bell said the information helped bring some closure to the family.

“When I heard about Albert and Harriette and the story they told, it was a sad story, but now we know,” he said.

“It was interesting to have the truth,” Little added. “It’s always better to know then not to know.”

The Schaarts plan to continue looking after the grave, putting flowers on it on Memorial Day and Feb. 3 and telling visitors about Marion Bell.

But their decision to tend to Marion Bell’s grave did more than help his family learn the truth; it fostered a friendship between the two families. Last year, Bell and his wife, Mavis, visited the Schaarts and got to see Marion’s grave. Earlier this week, the Schaarts came to Austin to visit the Bells. Little flew up from Charleston, South Carolina, to visit.

“What’s important to me is the relationships that have been formed,” Little said. “There was a family taking care of the grave back in the 40s and 50s and our family was connected with them, but we sort of grew apart because of distance and ages. Now, we’re connecting with Albert and Harriette and it’s a wonderful relationship.”

“It was a special connection, like we always knew each other,” Harriette said.

From what to do if a car hits an electrical pole to making sure someone won’t bleed to death, Mower... read more