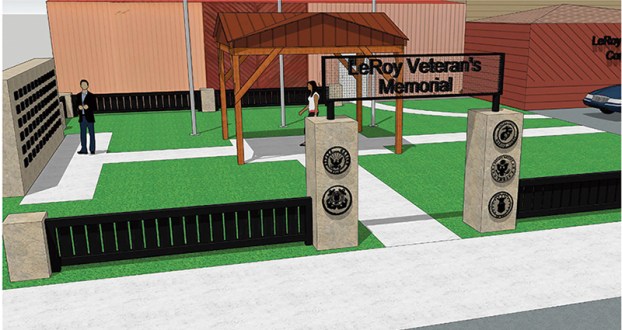 ‘A place for remembrance’; LeRoy Legion looking to start construction on veterans memorial

Members of LeRoy American Legion Post 161 are seeking donations to help in the construction of the proposed LeRoy Area Veterans Memorial.

According to LeRoy Legion member Don Orum, the idea for the memorial had been on the docket for a while.

“(The Legion) had been talking about it for several years, but in late 2017 we decided to move forward,” he said. “We came up with some rough ideas, then started moving forward more in 2018.”

The proposed memorial is slated to be placed in front of the LeRoy Community Center, west of the main entrance. Orum said the LeRoy City Council has given the Legion approval to build on that site. 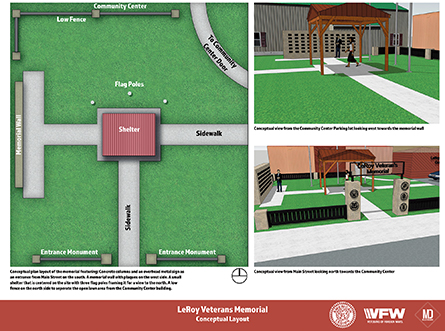 A sidewalk at the base will run from Main Street and the LeRoy Community Center parking lot through a gazebo to the wall, according to Orum.

The estimated cost for the project is $50,000. Orum said the Legion has received approximately half of that total in commitments.

“We’re in full throws of financing, getting quotes and pushing forward,” he said. “We’re gaining traction with the dollars and the work. A number of individuals have donated money. TNT Electric in LeRoy has offered to do electrical work labor. They just ask that we pay for parts.” 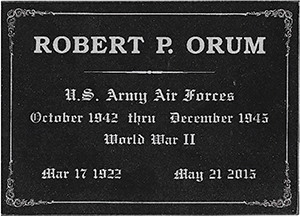 An example of how the plaques will look. Photo provided

Orum said they hope to begin construction this year and have the memorial ready by next summer.

Plaques for the veterans’ memorial are available for purchase. The plaques will contain the individuals name, service branch, years of service and any additional information the purchaser chooses to incorporate.

“I’ve got a lot of response from people who want to put plaques up,” Orum said.

Plaques are open to anyone who served, both living and deceased, on active duty, in the National Guard or Reserves. Orum said those veterans honored do not have to be from LeRoy; it is for anyone who wants to remember someone.

“It’s a place for people to reflect and remember those that served,” he said.

Donations to the memorial can be sent to LeRoy American Legion Post 161, P.O. Box 46, LeRoy, MN 55951. Checks can be made out to LeRoy Area Veterans Memorial Fund.

Bowling for the Battle strikes at cancer with record $76,260

The ever-growing Bowling for the Battle – A Fight Against Prostate Cancer group raised a record $76,260 for innovative prostate... read more