ST. PAUL— Budget talks resumed at the Minnesota Capitol on Wednesday, with Democratic Gov. Tim Walz, House Democrats and Senate Republicans saying little publicly about their discussions as they tried to complete a deal that would let the legislative session end on time. 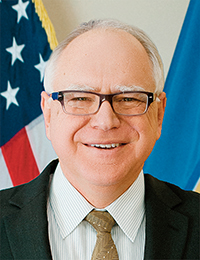 After marathon negotiations that began Tuesday lasted until 2:30 a.m. Wednesday, the three sides reconvened in the morning after getting a few hours of sleep.

“The reason for the lack of a lot of comments on this is that we’re at a really important time. There’s a lot of candid conversation happening. Those things are going back and forth,” Walz told reporters during a break in the private talks.

Walz, Hortman and Republican Senate Majority Leader Paul Gazelka need to set fiscal targets to guide the Legislature’s conference committees, which have been busy crafting the main budget bills of the session, which is scheduled to end Monday.

The biggest unresolved issues included proposals backed by Walz and the House Democratic majority to raise the state’s gas tax to pay for roads and bridges, which Walz scaled back to 16 cents per gallon from his original 20 cents, and to maintain a tax due to expire at the end of the year on health care providers that raises about $700 million annually to help fund Medicaid and other health programs.

Republicans went into the negotiations opposed to both tax proposals, saying there was no need for higher taxes when the state has a projected $1 billion budget surplus.

As of Monday, the last time the leaders made substantive comments on the status of the talks, the two sides were about $1.6 billion apart on a two-year budget that’s expected to total somewhere between $48 billion and $50 billion.

Vikings down No. 3 Bears in a playoff primer