Officials from the Southern Minnesota Education Consortium (SMEC) broke ground at the site of its new location Wednesday night on a patch of land east of Austin.

Located just off the exit ramp to Highway 56 from Interstate 90, the site will be the home for the seven-school district consortium’s $4.1 million education center, which has been 13 years in the making.

“Our mission is how do we continue in a way that serves to meet all of our student’s needs in our cooperative,” said Dan Armagost, SMEC executive director to those gathered at the site. “That missing piece is behind us.”

Construction has already begun at the site; those breaking ground were doing so in front of the general foundation layout dug out behind them.

The effort has been long in coming, but has been gaining ground over the last couple years as land was purchased from the Hemann family and cleared out and prepared by community and student volunteers.

“A lot of people donated time and resources to get us here, so thank you,” Armagost said.

When completed, the 13,000-foot structure will be able to incorporate a couple pieces long missed from what SMEC was able to offer — an alternative learning center and the ability to offer level-four programming for students. 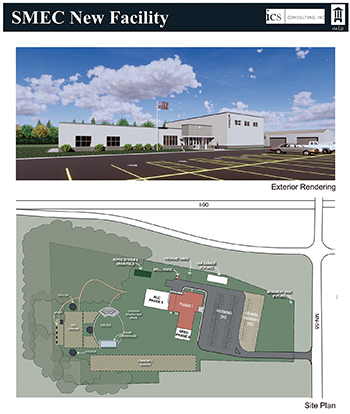 “We needed a more central location,” Armagost said earlier this month as volunteers cleared the location of trees and brush. “We also didn’t have Level 4 program space.”

“We want to have a more project-based learning system,” Armagost said previously. “Give them the opportunity to educate toward their strengths, rather than their weaknesses.”

As the building now begins to take shape over the coming months, Armagost said again Wednesday night that it was cooperation that was making this possible.

“This is seven districts, working together, to do what’s best for our kids,” he said.

Building construction is estimated to wrap up by December of this year. The facility is expected to be officially up and running by January of 2020.

— Hannah Yang contributed to this story

A woman was taken to the hospital with non-life threatening injuries after a Thursday morning accident on Highway 218 in... read more