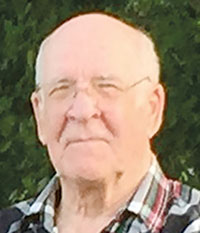 He was born on Nov. 12, 1927, in rural Elba, Minnesota, the son of Adolph and Alice (Maier) Krieger. He attended Plainview High School and graduated in 1946. Following high school, Reuben enlisted into the U.S. Army Air Force, proudly serving his country until his honorable discharge in 1949. He then went on to attend Winona State University, graduating in 1953. Upon his college graduation, he began teaching industrial arts at Lewiston High School.

On Dec. 29, 1956, Reuben married Marlene Stellwagen in Lewiston, Minnesota. Together they raised four children, Randy, Julie, Tom and Terry. In 1961, Reuben began teaching industrial arts in Austin. He retired from teaching in 1983. He was a member of Holy Cross Lutheran Church, Austin American Legion Post 91, and the Austin Area Amateur and Ham Radio Club. Reuben enjoyed traveling, camping, pitching horseshoes and bowling. He took great pride in his many ribbons, patches and trophies, which included a patch for his perfect 300 game in bowling. He had a propensity for telling bad jokes and loved shopping for cars. Reuben will be greatly missed.

A memorial service will be held at a future date. Services are prearranged and performed by Worlein Funeral Home of Austin. Condolences may be expressed to the family online at www.worlein.com.