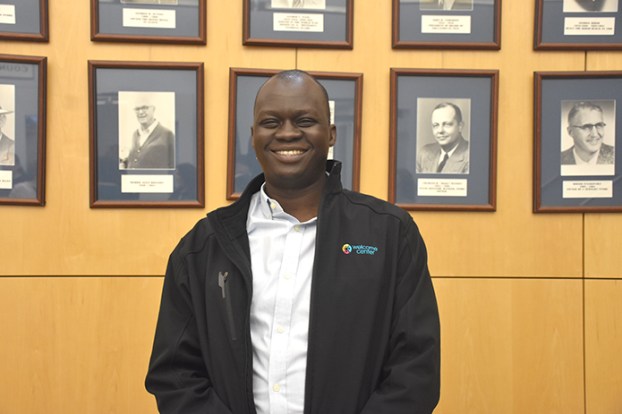 For regulars at the Welcome Center in Austin, Solomon Paul is a familiar face.

As director of the Welcome Center, Paul is familiar with assisting members of Austin’s immigrant community with any concerns they may have.

Now, Paul is hoping to share that experience with the Austin City Council as the new honorary council member.

“I want to thank the council and the mayor for the opportunity to serve,” he said during the council’s regular meeting Monday evening. ”I’m always passionate about public service.”

Of Sudanese decent, Paul was born in a refugee camp in Ethiopia, where his parents fled during the First Sudanese Civil War in the 1960s.

After living in Ethiopia as a refugee for 18 years, Paul came to the United States in 1999, eventually finding his way to Portland, Maine. In 2004, he received U.S. citizenship.

“When I swore an oath to this country for the very first time, I was so emotional,” he said. “The United States became my first country of citizenship. Now I can say I’m a citizen of a particular country, which I thought would never come at one point in my life.”

“I couldn’t be happier to call myself a resident of this place forever,” he added. “I am no longer an immigrant or a visitor; I am just as much a neighbor as they come.”

The honorary council member position was created at the suggestion of the Austin Human Rights Commission in its 2017 Welcoming Report as a means to expose members of the immigrant community to city government and “empower multicultural leadership.” Members are appointed to a three-month term by the mayor and approved by the council. The council approved the position last year.

Paul is the third individual to hold the honorary council position.

“I couldn’t be more grateful (to be an honorary councilman) and I look forward to learning more about city council,” he said.

Two arrested during raid in SW Austin; One had multiple felony warrants

Loving Two individuals were arrested Monday afternoon after police raided a residence on an arrest warrant. According to Austin Police... read more