Minnesota Starwatch: Jupiter rules over the month of June

This year, June belongs to Jupiter. Earth has been gaining on the giant planet, and on the 10th we lap it in the orbital race.

At that moment, Jupiter and the sun occupy opposite corners of the sky. Befitting its position, Jupiter rises in the southeast at about the same time the sun sets in the northwest. It proceeds to shine all night as it travels the sky with Antares, the gigantic red star of Scorpius, on its western flank.

Trailing Jupiter to the east, Saturn rises around midnight early in the month. Along with Jupiter and the stars, it comes up earlier in the evening as the days go by.

The night of the 16th-17th, June’s full moon rises near Jupiter and accompanies the planets in their nightly journey. Perfect fullness occurs at 3:31 a.m. on the 17th. 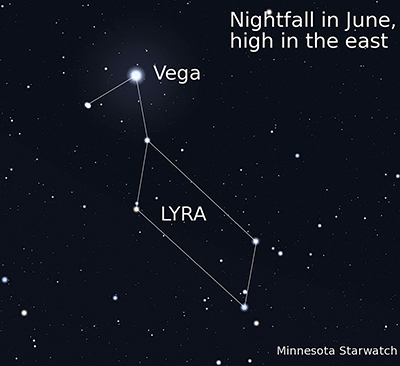 A month for Jupiter. Photo provided

If you’re out approximately 40 minutes after sunset in mid- or late June, you may catch two planets and two stars performing a dance in the sun’s afterglow. Close above the west-northwest horizon, Mars sinks as Mercury pops up for one of its signature short visits. On the 18th, Mercury, the brighter of the two, appears about half a moon width above Mars.

The two planets keep shifting their positions, and they end June by tumbling down to the horizon, in company with the nearby Gemini twins Pollux (the brighter) and Castor.

When the sky darkens, look to the east, where the Summer Triangle of bright stars is gaining altitude. The brightest is Vega, which commands the constellation Lyra, the lyre of Orpheus. Use binoculars to get a good view of a parallelogram of stars below Vega; these stars define the body of the lyre.

In the south, Bootes, the herdsman, resembles a high-flying kite. Anchoring the kite is Arcturus, the fourth brightest star in all the night sky (Vega is a close fifth). Arcturus has another distinction: It doesn’t circulate in the disk of the Milky Way like our solar system. Instead, it’s hurtling perpendicularly down through the disk, along with at least 50 other stars, in a pack known as the Arcturus Stream.

Immediately east of Bootes hangs a semicircle of stars; this is Corona Borealis, the northern crown. Its brightest jewel is known as Alphecca or Gemma.

Find U of M astronomers and links to the world of astronomy at www.astro.umn.edu.

Photos: Rollin’ down the River