Gert was born June 25, 1929, in Stacyville, Iowa, to George and Theresa (Biederer) Firsching. She grew up in Stacyville and graduated from Visitation High School.On Sept. 4, 1948, she married Fred Retterath at Visitation Catholic Church in Stacyville. They moved to Austin, where Fred worked at the Hormel Company until his retirement in 1980. 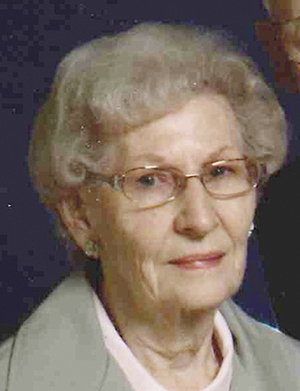 Gert’s faith in the Catholic Church was one of the most important parts of her life.  She was a member of Queen of Angels Catholic Church in Austin, held various positions on the Rosary Council and was an active participant in church functions. She was proud of being a homemaker most of her life. Her family was also a very important part of her life; she liked more than anything to spend time with her children, grandchildren, and great-grandchildren. Gert was much loved by them all. Gert loved to read, garden and travel. The highlight of her travels was going to Germany and seeing the house her grandfather grew up in as well as visiting the cities where her mother lived. She also loved visiting Rome and the Vatican.

A funeral Mass will be celebrated at 1 p.m. on Tuesday, May 28, 2019, at Queen of Angels Catholic Church with Father Dale Tupper officiating. There will be a 4 p.m. CCW rosary on Monday, May 27, 2019, at Mayer Funeral Home, where friends may call from 4-7 p.m. Visitation will continue for one hour before the service on Tuesday at the church. Interment will be in Calvary Cemetery. Condolences may be left online at www.mayerfh.com.