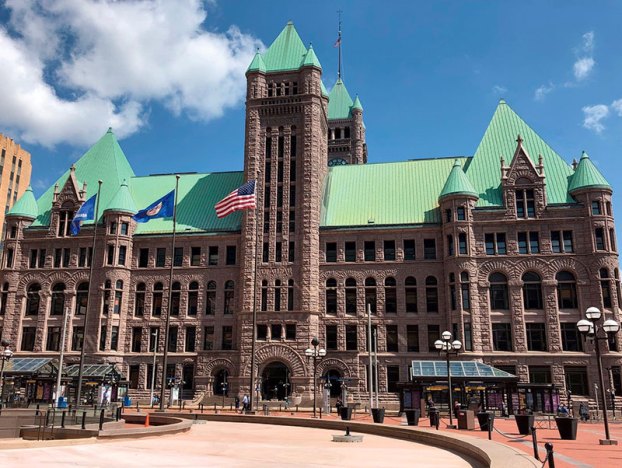 Minneapolis City Hall is a “Richardsonian Romanesque” building designed by Frank B. Long and Frederick Kees. It was completed in 1905. Marianne Combs/MPR News

An event this weekend offers the curious a chance to explore the history and culture of Minneapolis through tours of more than 100 of the city’s buildings.

The event, Doors Open Minneapolis, is also an opportunity to envision the future.

“I don’t think we’re actually allowing people back here,” said Minneapolis Mayor Jacob Frey, as he led visitors on a sneak-preview tour of his offices, including a secret back passageway that leads to the stately and rather imposing City Council chambers.

“Richardsonian Romanesque architecture,” he said. “I’ve been reading up on it lately … If you were a fan of ‘He-Man’ growing up, of course, City Hall looks a whole lot like Castle Grayskull.”

Frey said he wants Doors Open Minneapolis to be a celebration of civic pride.

“I want people to experience this city from perhaps a different perspective,” he said. “If there’s an interesting building that you normally drive or walk by, but you’ve never seen it from the inside, now’s your opportunity.”

Many city and county buildings will be open, including the main post office and the police department’s K-9 kennel. But the tour also includes local businesses, churches and theaters.

Millett is looking forward to checking out the lower levels of the Pillsbury A-Mill and its old direct drive water power system. He recommends visiting the Gethsemane Church and the Memorial Chapel at Lakewood Cemetery.

Scott Mayer, director of Doors Open Minneapolis, said it’s modeled after similar events in Chicago and Milwaukee. Mayer’s not an architect, but he loves beautiful buildings.

“Unfortunately, I don’t think we’ve done a really great job of preserving our history,” he said. “If you go to Chicago or Milwaukee, you’ll see that some of the buildings are just amazing examples of architecture from the past. We have some of that, but not enough, in my opinion.”

Mayer pointed to new developments in the North Loop that mix retail, office space and housing. “What I’m really excited about with Doors Open Minneapolis is that people will start learning about what the future of the city looks like,” he said.

The Minnesota chapter of the American Institute of Architects is actively involved in Doors Open Minneapolis, and is using the opportunity to raise awareness about the importance of design in creating livable cities.

Justice Jones, an apprentice at Juxtaposition Arts, will help lead an all-ages activity at the Mill City Museum that prompts people to imagine what a truly welcoming, equitable and self-sustaining community might look like.

“Getting people to think about what are you doing with your waste,” she said. “What kind of materials are you using, are you sourcing them locally? Can you remake a building using the foundation that’s already there? Do you absolutely have to destroy it all? Just finding ways to create communities that are better for the environment and better for people.”

Jones said the goal is to arm people with the tools for participating in the public design process, so they can speak up on issues like gentrification and accessibility.

Mayer said he hopes this is just the first of many Doors Open events for Minneapolis. Millett said he hopes St. Paul will be inspired to do the same.