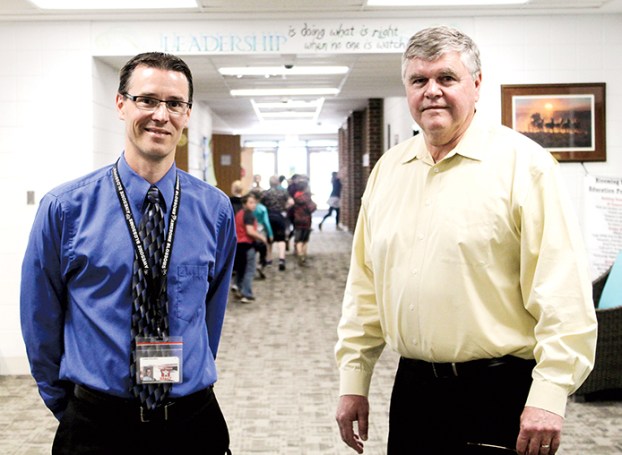 Blooming Prairie Elementary School Principal Chris Staloch (left) and Superintendent Barry Olson worked together for 20 years in the school district. Olson is retiring this summer, with Staloch assuming the role of superintendent. Photo by Hannah Yang/hannah.yang@austindailyherald.com

When one story ends, another one begins.

Blooming Prairie Superintendent Barry Olson will be retiring from his position on June 30, with Chris Staloch, elementary school principal, having been selected to take over as the district’s new superintendent starting July 1.

Ending a four-decade career in education may be a difficult choice for some, but for Olson, he knew his time was approaching. The community is invited for an open house to say goodbye to Olson on May 17 at Servicemen’s Club in Blooming Prairie from 4-7 p.m.

“I’ve been at it for 43 years,” Olson said. “It’s just time. It’s time. Everything’s in a good place, and there’s a lot that goes into school administration. I don’t really have a specific reason to retire, but it’s just the right time.”

However, the retiring superintendent was pleased with the direction the district is headed. He had no regrets, and the future was looking bright. With Staloch preparing to take on the responsibility of becoming the new superintendent, Olson believes that the transition would be seamless.

“We share a lot of similar philosophies, and so I believe the transition will go very well,” Olson said. “Chris believes in putting students first and developing programs. He has done a great job establishing great relationships with students and our staff. He has been through making tough decisions, and I think he handles them very well.”

For more than four decades, Olson has been an educator. He helped students find their way through school, and taught them how to be active, good citizens upon graduation. It’s been a long journey, but it’s one that brought him a wealth of experience, as well as wisdom.

Olson had obtained his bachelor’s degree from Dana College in Nebraska in 1976, before obtaining his master’s degree from the University of Nebraska at Omaha in secondary school administration and principalship. He then served as a teacher in Blooming Prairie from 1983 to 1987  and then worked for the Owatonna school district as a teacher from 1987 to 1999.

Eventually, Olson came back to Blooming Prairie in 1999 as the high school principal and assumed the role of superintendent in 2001. However, it was a tough balancing act. During this time, Olson had to take on responsibilities as the head of the district, while at the same time juggle his day-to-day tasks as the principal before high school principal John Worke was hired onto the staff in 2015.

There were many things that Olson remembered about his time as the Blooming Prairie superintendent. Whether it was helping with the 2007 facilities bond referendum of $14 million that taxpayers approved to help refurbish the high school or the integration of technology and one-on-one instruction in the classroom, it was a journey that Olson took great ownership.

During his tenure, the superintendent worked alongside his colleagues throughout the decades. Many of them were the same people that Olson had worked with since his administrative work for the district and has continued to work in Blooming Prairie.

“We’re proud of the stability in our staff,” he said. “You become one big family. I’ll definitely miss the people.”

One of those people included Staloch, who has worked in the district for 20 years, and had developed a good relationship with Olson throughout their time working together. Now that Staloch is taking over as superintendent, that left his position at the elementary school vacant. After several weeks of interviews, the district had chosen its new principal: Jacob Schwarz, who currently serves as elementary school principal in Grand Meadow.

“He lives in the community and will be a great addition to our team,” Staloch said. “Overall, he’s a good guy who understands the importance of building good relationships.”

Now that Staloch will be taking over the reins of the Blooming Prairie Public Schools District, he’s focused on continuing the legacy that Olson will be leaving behind, as well as furthering the mission of putting Blooming Prairie students first.

“(Barry) has always been there for us and he helps us with any major problems,” he said. “I’ll miss having that voice, but he’s only one phone call away.”

The annual American Cancer Society’s Relay for Life will see another change of venue this coming year in an effort... read more