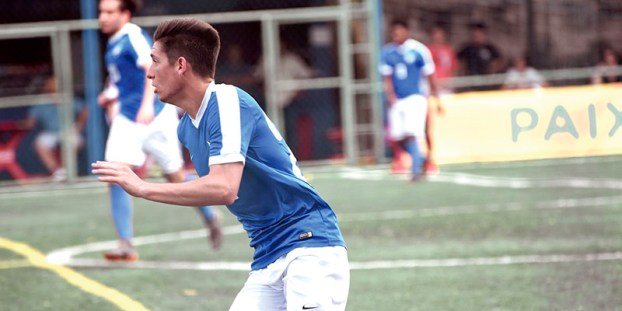 Sam Bailey runs the pitch during a game in Brazil with the Luther College Soccer team this spring. Photo provided

Pitch Perfect: Austin grad Sam Bailey gets a look at soccer on the big stage

Austin grad Sam Bailey recently took the soccer trip of a lifetime as he joined several of his Luther College teammates for a six-day trip to Rio De Janeiro in Brazil.

It was just the second time Bailey had ever flown and it was his first time leaving the country. Bailey also paid approximately $2,000 for the trip, which he couldn’t pass up on.

He and 16 of Luther’s 40 players were able to play in three games against some tough competition from professional academy teams in Brazil.

“It helped show me what I need to step up to and how I need to play,” said Bailey. “It was cool to see how these kids grow up with soccer being their life. They rely on soccer to get through life. Some of them would quit school and play soccer to get out of the poverty that they’re in. That kind of opened eyes.” 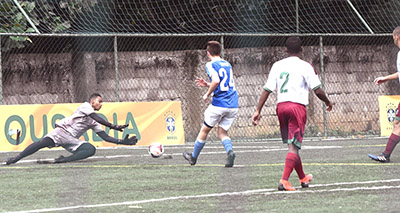 Sam Bailey takes a shot for Luther in a game played in Brazil recently. Photo Provided

Bailey spent most of his time on Luther’s reserve team this past fall, but he’s now driven to fight for a spot on the varsity roster. While he got some sight-seeing in, Bailey and his teammates spent a good chunk of their time in Brazil focusing on training for the upcoming season. Bailey said one of the highlights for him came after his team’s second game when one of his teammate’s parents told him that he was the MVP of the group Luther had in Brazil.

“I was playing midfielder and I played most of that game. That really boosted my confidence,” Bailey said. “The big thing for me was being able to get a lot of minutes against some really good competition.”

Bailey was a standout player for the Packers soccer team that took third in the Minnesota Class A State Tournament in 2017, but he’s had to battle with several other players for playing time with the Norse.

“One good thing about this trip is we started training two weeks earlier than everyone else. Doing that really helped me prepare,” Bailey said. “That will help for next season. I need to take what I’ve learned so far and that will help me prosper for next fall season.”

Bailey has always been drawn to soccer and said it was a great experience for him to see how big the sport is in Brazil. He and his teammates were able to attend a game in one of the World Cup stadiums to see what the sport is like on the big stage.

“The fans were so supportive and they had so much energy and heart into the game. The whole city of Rio has a lot of support for soccer,” Bailey said. “It was cool to see how many people enjoyed the sport.”

Bailey played in just two varsity games during his freshman season at Luther, and was able to attempt just one shot.

Luther is coming off a season where it lost 1-0 to the University of Chicago in the NCAA Division III Tournament Sectional Final. The Norse finished with a record of 19-4-1 overall.