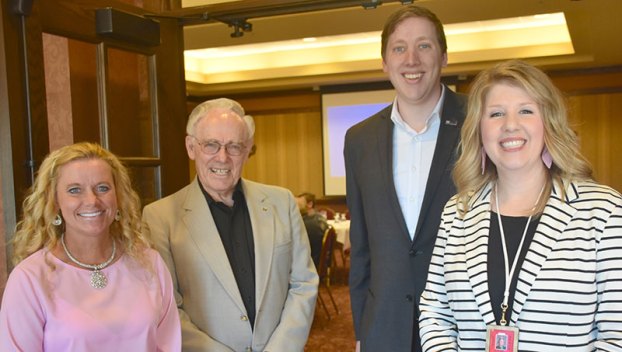 National Volunteer Week: Rotary has been providing ‘Service Above Self’ for almost 100 years

Bob Brinkman joined the Rotary Club of Austin in order to “spread” the hands of volunteerism in his community.

Brinkman at that time was a banker with TCF and some of his fellow employees at the bank were already members of the Lions Club, another wellspring of volunteerism in Austin.

“We thought it would be good to spread (our volunteerism) around,” he said, by joining the group.

“I enjoy the programs; our efforts as a club are well-received,” he said on Monday before the weekly meeting of the group. “It’s a social thing as well; you get to know a lot of people. We get along.”

It is apt to talk about Rotary at this time, during National Volunteer Week. The club has had a presence in Austin just shy of 100 years, and its mission has never changed.

According to the Rotary website, the word “Rotary” came from the group’s early practice of rotating meetings among the offices of its members. While the local Rotary today regularly meets at the Holiday Inn Conference Center for its weekly lunch meetings, the intention of “rotating” has remained the same. With a membership of professionals of diverse backgrounds, the Rotary helps members create new friendships and connections that result in a better understanding of a community’s people, businesses and organizations.

“And I think that is just awesome,” said President Katie Baskin.

Each meeting features a talk highlighting a facet of the community or an initiative. The Austin Rotary has supported a number of different efforts; Reach Out and Read, the CEO program and the Lunch Tray Project are just a few recent examples.

The club also helped bring the showing of “Screenagers” to town in recent weeks, a documentary exploring the impact of the digital age upon teens. The Rotary also supports neighboring clubs in service projects or fundraisers. Its annual Trivia Night is a major source of funds that the group uses for donations.

Rotary’s tradition of “Service Above Self” is what drew new member Jeff Gross to the Austin club. Gross joined the club in 2018 after he moved from Chicago, where he was involved in another non-profit organization committed to serving the community. Gross is a commercial lender with US Bank in Austin and a native of LaCrescent. He grew up watching his father’s involvement with a Rotary club in LaCrosse, Wis., he said.

“I joined as a way to connect” with the people of Austin, he said. In addition to its commitment to support the community, Rotary provides insight into how a community works, and its people, he said.

“I like the idea that you can meet people you wouldn’t ordinarily see or come in contact with,” he said.

“As an educator, I know how important those connections are,” she said. She joined when after accompanying high school “Rotary Students of the Month” to meetings, she began to see the benefits of being a part of the club.

Today, there are 73 members of the Austin club and enthusiasm shown by members hasn’t dimmed over the years. On Monday, several noted that any member of the community is welcome to consider joining the club, which meets at noon every Monday at the Holiday Inn Conference Center. Those interested can attend a meeting or email Baskin for details at katie.baskin@austin.k12.mn.us

Event this week: Those interested can attend a get-together from 5-7 p.m. Friday, April 12, at the Angry Hog Brewery and Taproom. The event will recognize all members and is also open to anyone interested in learning more about the club, according to Tami Yokiel, membership chairwoman.

‘We need the choir to sing’: Now is the time to start the conversation about climate change

Megan Van Loh walked within a circle of about 30 people Saturday at the Jay C. Hormel Nature Center. As... read more