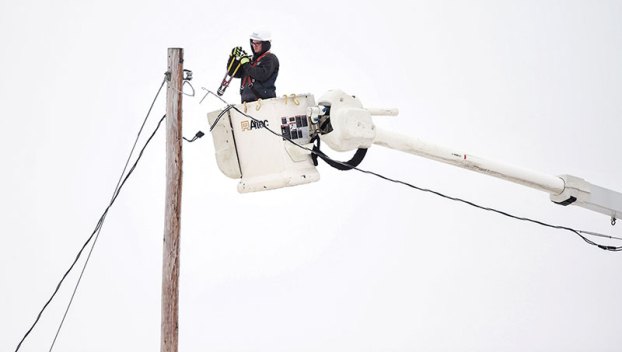 A worker for Freeborn-Mower Cooperative cuts away a power line that was drooping across Highway 56 just north of Brownsdale earlier this month. Herald file photo

Freeborn-Mower Cooperative Services is estimating a preliminary $3 million in damage from the storm earlier this month, which at its peak left 12,000 members without power.

Cooperative President and CEO Jim Krueger said it will take another month to tally final costs, as bills continue to trickle in from the event.

He thanked his employees, the 130 workers who came in from other areas to help and the community for the support given during the recovery process as crews worked long hours to restore power.

“I’m proud of the effort of all of the employees to come together at that time of disaster and make the most of it,” Krueger said. “We did an awesome effort, and we did it safely, which is top priority.”

Six hundred twenty-five poles had to be replaced from the damage, and crews will continue to clean up broken poles and other debris in the next few weeks, said Al Stadheim, director of operations and engineering. The worst damage was in the western third of Freeborn County and in northwestern Mower County.

The cooperative will apply for reimbursement for a portion of the damages once both state and federal disaster declarations are made. Federal reimbursement through the Federal Emergency Management Agency covers up to 75 percent of eligible costs, and the state covers up to 15 percent. If a federal declaration is not made, the state covers 25 percent.

Gov. Tim Walz on April 11 declared a state of peacetime emergency throughout 20 counties in the state, including Freeborn and Mower counties.

Lori Read, Freeborn-Mower Cooperative Services compliance and training coordinator, spoke of the quality of the emergency management team at the county level and the coordination with state officials.

Dawn Schroeder, communications specialist with the cooperative, spoke highly of people in the community who offered kind acts for the workers, as well.

Schroeder and Mary Nelson, director of cooperative relations, worked to provide updates to the community about the outages and said they were blown away by the engagement they saw from the community during the outages and how much social media played a part in getting out and informing people about what was taking place.

Schroeder said for the week of April 10 to April 16, the cooperative’s Facebook posts reached 224,000 people, and in that period alone, they also gained 1,073 new likes on Facebook.

They said they tried to post updates two times a day to let people know how power was being restored and to encourage people to call in if they encountered an outage.

After last week’s wind and snowstorm forced a state of emergency, the situations in Mower and Freeborn Counties are gradually... read more