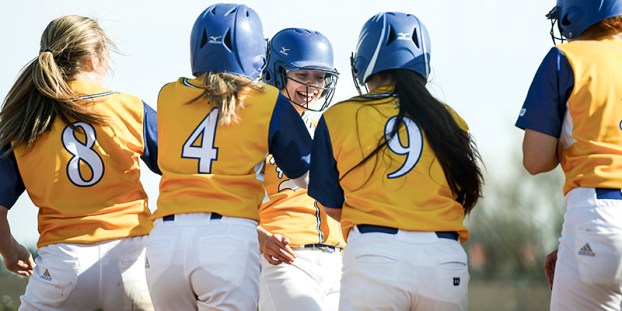 Hayfield’s Caitlyn Hendrickson is met by teammates after her three-run blast against Blooming Prairie Thursday in Hayfield. Eric Johnson/photodesk@austindailyherald.com

Breaking out the boom: Vikings rack up runs in win over BP

HAYFIELD — A lot of the faces have changed for the Hayfield softball team this spring, but the Vikings can still hit the lacing out of the ball.

Seven players had at least one hit for the Vikings as they beat Blooming Prairie 13-7 in Hayfield Thursday.

While Hayfield only has three starters left from last year’s team that went to team’s fourth straight state tournament, the Vikings newcomers have been swinging for the fences. However, it was a familiar face who came up with her first career home run to swing momentum in the Viking’s favor against the Awesome Blossoms (4-4 overall). 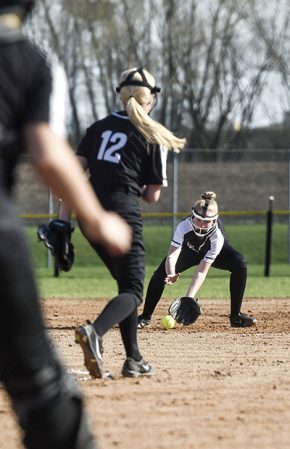 Sophomore pitcher Caitlyn Hendrickson connected on a pitch and drove it to right field to give Hayfield (5-3 overall) a 7-5 lead in the bottom of the third. This is Hendrickson’s first season as a full-time hitter in Hayfield’s lineup as she was strictly a pitcher in years past. She credited former Hayfield baseball coach Craig Selk for giving her and the team a boost.

“I’ve been working in the mornings really hard,” Hendrickson said. “All of our coaches help us a lot and Mr. Selk is kind enough to give us his time. He doesn’t get paid to do it, but he’s a great coach and he helps us a lot.”

The Vikings have scored at least six runs in six of their seven games and they’ve now eclipsed 12 runs in three games. Freshman Anna Bamlet has been a big part of the offensive surge this season and she was three-for-four with three RBIs Thursday. Bamlet was able to fight off pitch after pitch in each at bat before finding the pitch she wanted to hit.

“I think it’s just the drive I have. I love this game so much and I don’t know if I could go up there and give up on an at-bat. I just dig deep and think of the smiles on the coaches,” Bamlet said. “(Our coaches) constantly remind me what I’m doing wrong, they help me fix it and they help me stay positive along the way. I don’t think I could do it without any of the coaches.” 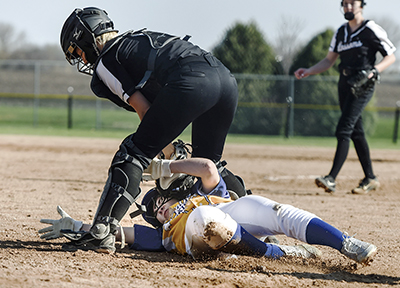 Hendrickson struck out 10 and walked zero in the win, but BP did do some damage with their bats. Julia Worke hit a pair of two-run homers for the Blossoms and she finished with five RBIs.

“She’s a great hitter,” Hendrickson said of Worke. “Everything I tried to do wasn’t working, but my team had my back and they kept me positive. The offense was good and the atmosphere in the dugout was good.” 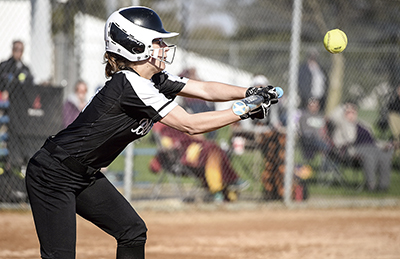