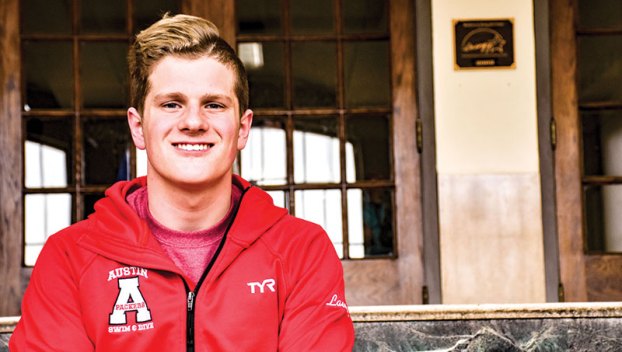 Brock Lawhead, an Austin High School senior, won the Minnesota Triple “A” Award over the weekend for his accomplishments in academics, athletics and arts. Lawhead is the first Austin student to win the overall state award. Hannah Yang/hannah.yang@austindailyherald.com

Brock Lawhead is one talented student, but this honor was something even the Austin High School senior didn’t imagine for himself.

Over the weekend, Lawhead won the Minnesota Academics, Arts and Athletics (AAA) Award, which recognizes outstanding leadership and excellence in those three categories. Austin High School had students win at the regional level before, but Lawhead will be the first Austin student in Class AA to have won the overall award at the state level.

“I was at the banquet, and was just guessing which of the seven other guys there would be getting the award,” he said in an interview on Monday. “I figured it’d be this guy, or that guy. Apparently, when they called my name, the people sitting in front of me said my jaw dropped to the floor. I was honored to be there, and I was very surprised. To win the whole thing is insane.” 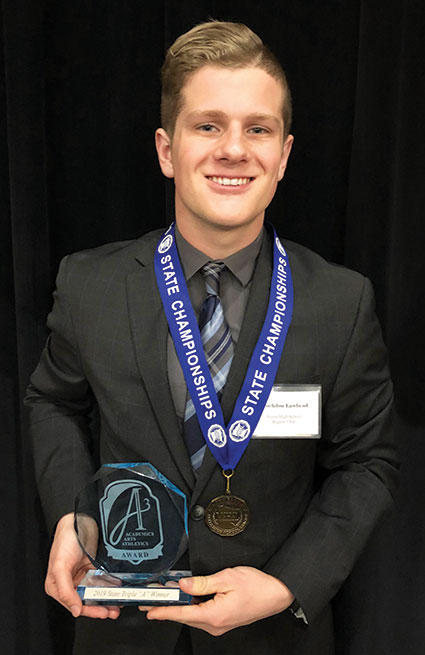 Brock Lawhead with the Triple “A” Award from the Minnesota State High School League. Photo provided

The Minnesota State High School League recognizes and honors high school seniors who excelled in the classroom, on the athletic field and in the fine arts. The purpose of this program elevates academic standards and creates awareness of League-sponsored activities and values.

“We are very excited for Brock and his family,” said Lisa Quednow, activities director for APS. “Brock truly is a person that exemplifies all of the things that a Triple A award winner should be.”

In order to be considered for the AAA Award, a student must be a senior at the time of nomination and hold an accumulative GPA of 3.0 or higher at the date of the nomination. The student must also participate in a league sport and a fine arts activity.

Lawhead was one of four students in the state to receive a $1,000 scholarship. He plans to attend a four-year college to obtain a political science degree, but has not decided where he will enroll next fall.

“This is truly a great honor for Brock,” said Superintendent David Krenz. “To be recognized not only as a student who is involved in many activities, but as a student who excels in all of these areas. One very important aspect that ties all of it together for Brock is his hard work and leadership in everything that he does. He is a great young man who represents our school, community and state with dignity and honor.”

Lawhead is the National Honor Society president for Austin’s chapter and has a 4.181 grade point average. He served on the Austin High School Student Council for four years. Not only that, Lawhead serves as the cross country team captain, swim team captain, and is concertmaster for both the Austin High School orchestra and chamber orchestra. He’s the Big 9 Select Orchestra principal violinist for second violin during the last two years and performs in the Austinaires and Austin High School Honors Choir. Lawhead is also a member of DECA, a student organization that supports young entrepreneurs.

Being involved in so many different extracurriculars may be high pressure for any student, but Lawhead said he loves engaging socially with different classmates, and has worked hard to maintain a balanced life.

“I learned a lot of self-discipline,” he said. “I think it’s a testament to all the teachers, coaches and conductors who helped me become the person I am today. Without them, I wouldn’t have been able to succeed.”

Although it seems intimidating having a lot of responsibility and commitment to juggle a high grade-point average as well as various leadership roles in sports and in music, Lawhead stated that he prioritizes his work and focuses on things as they come along.

However, he did say the people who helped him along the way were the ones who needed to be acknowledged and recognized.

“Thank you to all my coaches, teachers and conductors,” Lawhead expressed. “Thank you for pushing me to be my very best self.”

When it comes to customer service, Katie Johnson wants to make sure each McDonald’s guest has the best experience possible.... read more