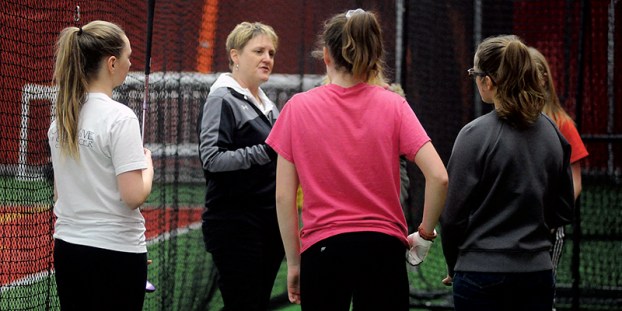 Paula Ziems speaks to the Austin girls golf team before practice at the Dome at Wescott Athletic Complex on Tuesday. Rocky Hulne/sports@austindailyherald.com

Paula Zeims is in her happy place when she’s on the golf course and now she’s going to try and spread that happiness to the Austin girls golf team.

Zeims, who came to Austin from the district of Atwater-Cosmos-Grove City last year, has taken over as the Packer girls head coach this spring. Zeims coached junior high golf for two years and she was an assistant with the varsity girls at ACGC, which is located near Willmar.

Zeims grew up playing softball, but she eventually gave it up to focus on golf. 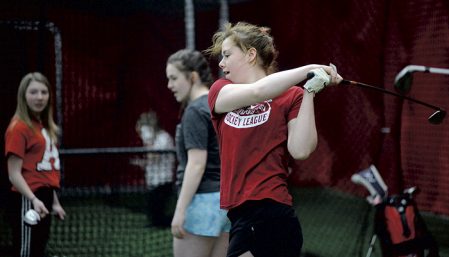 “I absolutely love golf. I love the elements of golf. It can be both a very invigorating and a very frustrating game,” Zeims said. “I love working with other players and watching them grow and seeing how they improve their scores over the year.”

Zeims said that she loves to test herself on the golf course. She appreciates the battle with the highs and lows that come with hitting a good drive on one swing, and then landing in a sand trap on the next swing.

“It’s challenging and I love a good challenge. We joke about how golf is so inconsistent and if we were consistent, we’d be playing in the pros,” Zeims said. “I like trying to improve myself and drive it further. I don’t think I’ll ever par every hole, but every time I get a par or a birdie, that’s one step better from where I started. I like to see that improvement and the joy on the faces of my athletes too.”

The Packer girls have had their numbers dwindle in past years and this team has just two seniors out of seven total players, but Zeims is hoping to see those numbers rise.

Austin senior Olivia Krause, the team’s lone captain, said that she’s seen some good things early this spring as the Packers have been working hard in the dome.

“It’s been good. We’ve been hitting around in the dome and we’ve had some new players in,” Krause said. “We’re trying to get a feel for where we’re at. I’ve learned that (Zeims) is very passionate about golf and she really wants to teach us how to play the game.”

As the Packers move onto outdoor practices in the near future, Zeims is looking forward to seeing how her team reacts to a sport that can test an athlete in many ways.

“It’ a very well rounded sport, mentally emotionally and physically,” Zeims said. “Because golf is a frustrating sport, it helps you work on not only the physical aspect, but also your mental and emotional stability or sanity as well.”

Austin is scheduled to open its season in Rochester John Marshall on April 8.