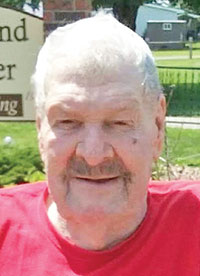 Howard was born on July 31, 1933, in Austin, Minnesota, to John and Elise (Davis) Smith. He grew up and attended school in Austin. On Dec. 29, 1950, Howard enlisted into the United States Air Force. On Feb. 11, 1952, he married Shirley Ann True. Howard was honorably discharged from the Air Force on Jan. 11, 1954. In 1987, Howard and Shirley moved to Albert Lea. He worked for the Milwaukee Railroad for 17 years. He was a member of Crane Community Chapel, the American Legion in Albert Lea, and a former member of the Moose in Austin and Albert Lea. Howard enjoyed fishing, camping, loved to play cards, and bowled on a league. He also enjoyed Sunday dinners, the holidays, and always enjoyed decorating for Christmas and making homemade cranberry sauce. He will be dearly missed.

Memorial services will be held at 1 p.m. on Monday, March 25, 2019, at Crane Community Chapel in Austin with Pastor Dale Christiansen officiating. Visitation will be held one hour prior to the service on Monday at the church. Interment will be in Oakwood Cemetery at a later date. American Legion Post 91 and VFW Post 1216 will conduct military honors. Services are prearranged and performed by Worlein Funeral Home of Austin. Condolences may be expressed to the family online at www.worlein.com.