Girls basketball: Lyle-Pacelli and Goodhue are on the big stage again

The Lyle-Pacelli girls basketball team has one more hurdle if it wants to get back to the Minnesota Class A State Girls Basketball Tournament, and it’s a very familiar one.

The Athletics (23-4 overall) will square off perennial section power Goodhue (23-6 overall) in the Section 1A Tournament title game in Mayo Civic Center at 6 p.m. Thursday.

LP is riding a 12-game winning streak and it’s coming off an emotional high when Abby Bollingberg hit a buzzer beater to knock off Grand Meadow 54-52 on Saturday. The Wildcats beat Hayfield 38-29 on Saturday. 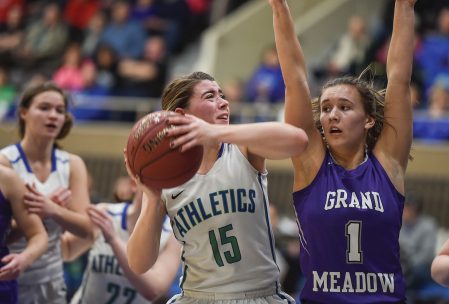 “We definitely want to go back (to state),” Bollingberg said. “It was so fun and memorable last time and if we have the opportunity to go back, we don’t want to waste it.”

While nerves often strike up in big games, LP and Goodhue are both plenty equipped to handle any adversity on the big stage. LP junior Olivia Christianson said the Athletics were able to keep their composure throughout the win over GM on Saturday.

“We have experience playing bigger games,” Christianson said. “On Saturday we didn’t let our nerves get the best of us.”

Meyer said LP has stayed motivated with the team motto “Us for Us” this season.

“Our mantra is playing for each other and every day we step on the court we’re trying to get better,” Meyer said. “We’re just staying in the moment and we’re trying to be the best we can be.”

The Austin City Council unanimously voted in favor of an ordinance extending the declaration of a snow emergency during its... read more