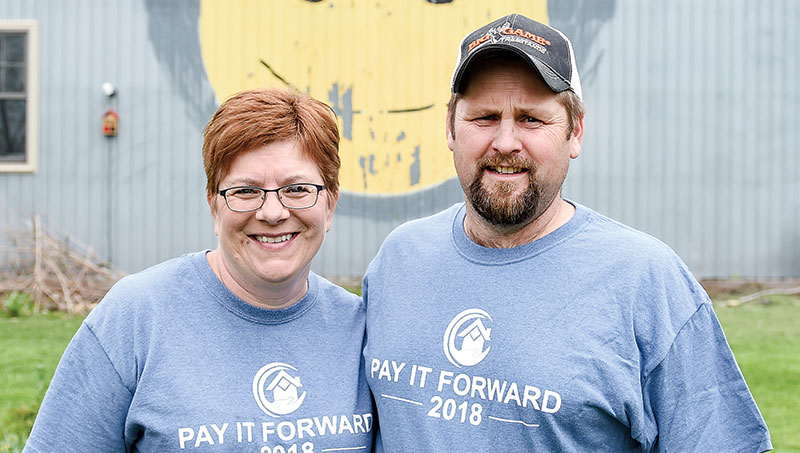 When Kris Graff and her friend Karen Zech, both of Austin, were having coffee one day, the radio was on. What seemed like a typical morning turned into a life changing and emotional one: Gina Grundmeier had announced on air that Zech would be the recipient of the Pay It Forward Bathroom Makeover.

“Gina said on the air ‘I know they’re having coffee,’” Graff said of the moment. “Karen looked over at me and the tears started flowing. It was very, very emotional.”

Zech, who’s in her mid-60s, suffers from severe rheumatoid arthritis. With a small house and a non-accomodating bathroom, those who know Zech wanted her to receive the help needed to make difficult tasks easier.

“Karen has said one of the hardest and most emotional parts of living with her physical limitations is when she has to give up her daily shower because she knows she will not be able to climb in the tub, clean herself and get back out again,” wrote Graff in a letter to the contest. It was Graff who nominated Zech. “She has already accepted that soaking in a warm tub is no longer a possibility for her. To have to make a choice as to whether she can handle the danger of trying to shower is demeaning, and with your help, unnecessary.”

Pay It Forward is a collaborative effort involving Mower County businesses and individuals to help families in need. For the large bathroom remodel, a family or person is chosen based on emotional and physical need after an essay and photo submission.

Then, the Pay It Forward crew has a chosen week and the project starts Monday and completed by that Friday.

The nonprofit was created after Gina and Todd Grundmeier, owners of T’ NG Plumbing in Dexter, lost their home in a fire back in 2010, and received immense support from the community. Each year, the organization the two created helps with a bathroom remodel, making Zech’s bathroom the sixth project chosen for the process.

This year’s contest had 78 submissions, according to Gina Grundmeier, and each time it becomes difficult for one winner to be chosen among those who need help. However, Zech’s nomination was one that stood out the most.

“Karen’s nomination was beautifully written,” Grundmeier said. “Everybody that we talked to has talked about what a kind and compassionate person she was, and how much she has done for everyone else and looks out for them. We just decided it’s time we look out for Karen.”

For the project timeline, Grundmeier looks toward the week of March 25, starting at 7 a.m. with the reveal to Zech of the finished remodel at 5 p.m. that Friday.

Graff has known Zech for many years, having worked together at Woodvale Group during the 80s and 90s. After watching her friend’s condition deteriorate, she felt it was “getting to be too much” for Zech. The tiny house has been home for Zech’s family her entire life.

“This is getting to be too much,” Graff reasoned for writing the nomination letter. “It was either leave this home, which is her family home, or having something done to it. It’s too much for her, and she’s a very good person.”

So when Graff heard that Zech had won the bathroom remodel, she felt hope that her friend finally got something she deserved to improve her quality of life.

“I got the call from Gina, and I just started bawling and hitting the island crying,” she recalled. “It was kind of like ‘yes, yes, yes.’ The house is very, very small and it’s a nice size for one person, but not for someone with the kind of condition she has.”

Graff’s husband John had tried creating accomodations for Zech by attaching loops to drawers and cupboards, so that she would be able to open things with her wrist as opposed to grasping handles with her hands. However, the bathroom had no room for a wheelchair, if Zech needed to utilize it more in the future.

Despite the pain, Zech has continued to figure out ways to live her life through a motto: “Adapt, adjust and overcome,” according to Graff’s nomination letter, and prompted her to reach out to Pay It Forward.

“What makes Karen so special and so deserving of this award is not her numerous debilitating adversities, but her incredible attitude toward her severe limitations,” Graff wrote. “She constantly amazes me with the clever innovative ways she comes up with to continue to live her life as best she is able.”

This new project opened a bittersweet chapter for Zech, Graff explained, as this was the home that Zech had lived in her entire life and the changes meant some different projects for the home she and her family had put together.

“She’s extremely grateful for going through this, but it is an emotional thing,” she said. “It’s bittersweet in a sense that it’s beautiful, but there’s a sense of sadness with it.”

However, with the project, Graff said that Zech will finally have a place her needs will be met completely, and for winning the contest, Graff doesn’t think of anyone else more deserving than her friend.

“We don’t go anywhere in town without someone saying that she was the ‘best pick ever.’ Karen has worked for others her whole life, and everybody is so excited for her. It’s just really neat and reinforces my belief that I did the right thing. Thank you to T’NG, they’re amazing.”