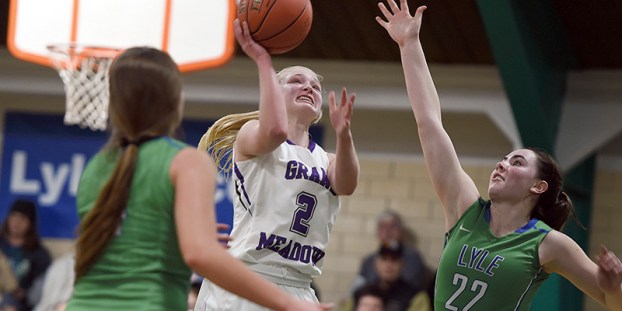 Grand Meadow’s Riley Queensland for two under pressure during the first half against Lyle-Pacelli Tuesday night at Pacelli. Eric Johnson/photodesk@austindailyherald.com

Something had to give in Pacelli Gym Tuesday night.

The Lyle-Pacelli girls basketball team had a conference winning streak of 97 games on the line and the Grand Meadow had won 11 straight games to start the season. The Superlarks came out ready for the challenge as they used an early charge to shift the power of the Southeast Conference in their favor as they beat the Athletics 60-34 to snap LP’s streak.

GM head coach Ryan Queensland has lost a lot of games to LP over the past few years and he was finally able to stand in the winner’s circle on Tuesday. 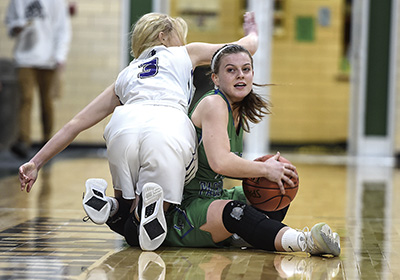 Lyle-Pacelli’s Abby Bollingberg looks up for an outlet after wrestling the ball away from Grand Meadow’s Skylar Cotten Tuesday night at Pacelli. Eric Johnson/photodesk@austindailyherald.com

“I have a lot of respect for the girls that we played tonight, their program and the girls that we’ve played here in the past,” Queensland said of LP. “It’s been a fun rivalry and my hat goes off to LP. (LP head coach) Anna (Meyer’s) doing a nice job with them and obviously they had a lot of success with Justin (Morris).”

After Olivia Christianson hit a three-pointer to bring LP within 5-4 early on, the No. 4 ranked Superlarks (12-0 overall, 8-0 SEC) used a 13-0 burst that saw Skylar Cotten, who had 16 points, hit a pair of threes and convert a lay-up. GM’s Jordyn Glynn, who had 21 points, seven rebounds, five assists and four steals, took over from that point as she she had a steal for a lay-up to ignite a 14-3 GM run that put the Larks up 45-15.

“We know who has the hot hand and we know if we make an extra pass, we’ll get a better look than we already had. We were always hunting for our teammates,” Glynn said. “It’s nice (to win this one) and getting to share it with my teammates is even better. It was just another game and we just had to stay with our process and play how we play and we should get the outcome we wanted.” 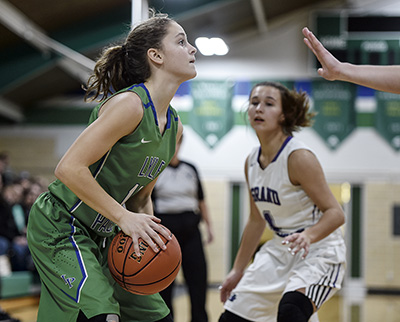 “We were really focused on trying to come out strong,” Queensland said. “We wanted to get settled in during those first couple of minutes.”

While LP would’ve liked to get its conference win streak up to triple digits, the program will have to appreciate the wins it did have. LP also had two state tournament appearances over the stretch of that win streak and it won the Minnesota Class A State Title last season.

“It’s super impressive for any team for any team to win that many conference games in a row,” Meyer said. “But the bottom line is you’ve got to come out and play hard to win basketball games and we didn’t do that tonight. We’ve got to get better at facing adversity.” 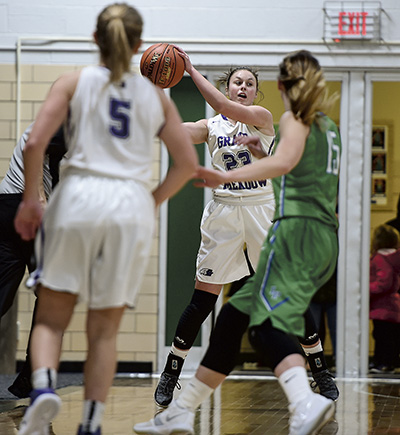 Grand Meadow’s Jordyn Glynn takes a pass along the side against Lyle-Pacelli in the ifrst half Tuesday night at Pacelli. Eric Johnson/photodesk@austindailyherald.com

Kayla Christopherson had 11 points, five assists and two steals for LP (11-4 overall, 6-1 SEC) and she also provided a lot of energy in the second half as she was diving for loose balls and chasing down plays on defense. 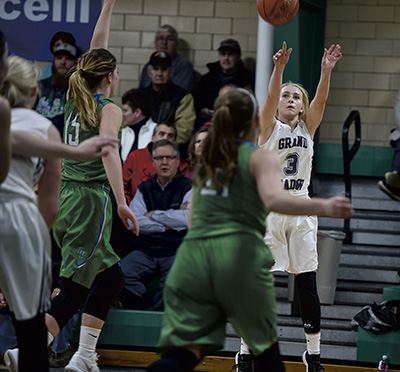 Grand Meadow’s Skylar Cotten launches a three in the first half against Lyle-Pacelli Tuesday night in Pacelli. Eric Johnson/photodesk@austindailyherald.com