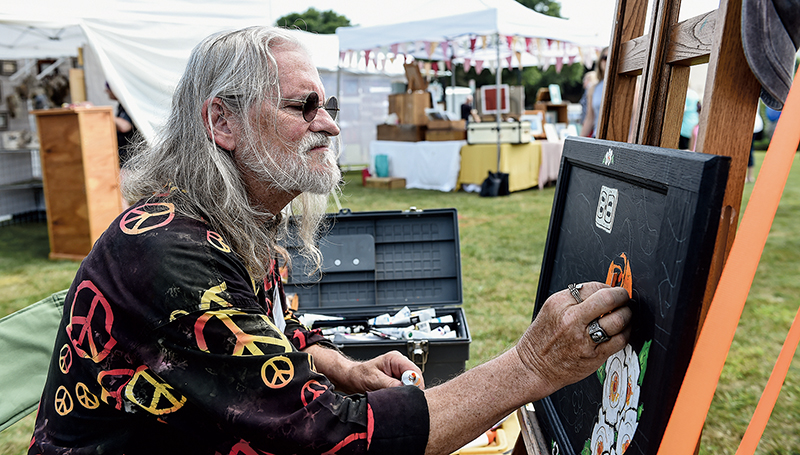 At first glance, Bob McGill of Signal Mountain, Tennessee, wasn’t much different from any other of the many artists at this weekend’s Austin Artworks Festival.

Take a closer look though and you’ll see he’s developed a razor’s detail to every print he does — literally, a razor.

McGill’s colorful pieces, hanging from the four walls of his set up, were all done using nothing but razor blades and paint squeezed from a tube, and if that wasn’t enough to make you stop and watch the happy artist at work, the idea that they are all 3D simply adds to it.

McGill had 3D glasses on hand for people to prove the point, adding a trippy detail to his prints.

“The 3D was an accident,” McGill said. “I didn’t know I was painting that way for five years. It just blows my mind away.”

The reason for this boils down to his style; the way the black lines mesh with how he lays his colors down.

“It’s a specific technique, the way I do it that makes it 3D,” McGill said.

Listen to McGill tell his story and you’ll find that his getting to this point was a string of interesting anecdotes through life.

He actually stopped painting in high school thanks to a discouraging art teacher.

McGill said he started painting again thanks to encouragement from family and friends in 1995. 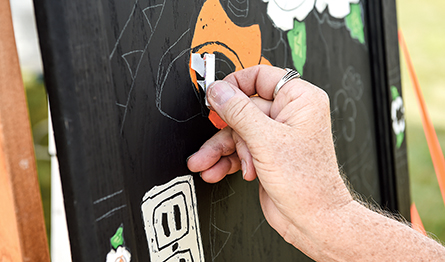 Bob McGill uses razor blades to apply paint to his pieces which are also three dimensional.

During that time, he set out to find his own style and took lessons with an artist named Walter Bunn Gray. Here’s where the next unique turn came to McGill.

For six months McGill learned under Gray, but found his art was becoming more like his teacher’s than his own.

“He wasn’t happy with anything I did so he threw five razor blades at me and told me to work with them,” McGill said. “I thought he meant to practice painting with the razor blades.”

McGill said he came back and showed Gray his work to which Gray said, “I love everything you’ve painted with them.”

For backgrounds, McGill makes use of everyday items and discarded things like lumber or cabinet doors.

As far as coming all the way up here from Tennessee — again, things just kind of worked out thanks to timing and placement as it also gave him the chance to see his brother, Pat McGill, who lives in LeRoy.

“This is the first show that became available since making the decision to do shows again,” McGill explained. “I also, haven’t seen my brother in 10 years.”

There are a lot of reasons why an artist pursues art, but for McGill it just comes down to being happy. He doesn’t even mind if his art is copied.

“If you want to copy it go ahead,” McGill said. “It won’t be yours, but go ahead. I always tell people when they ask about it, ‘go ahead, then there would be two people not making any money.’”