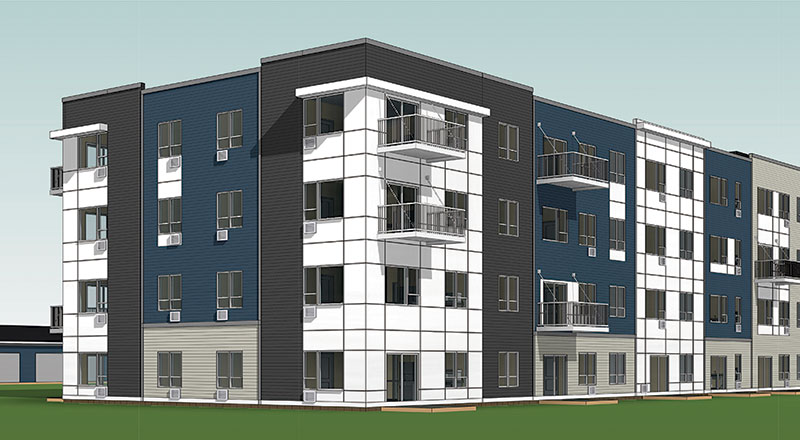 An artist’s rendition of the new complex that will go up behind Walmart and Runnings. Photo courtesy of Kaas Wilson Architects

A proposed multi-family apartment development in Austin took another step forward on Monday after the Austin City Council voted to approve a tax abatement request from Nathan Stencil, CEO of Stencil Group.

“We are currently working on our architectural and engineering plans,” Stencil told the Herald.

Stencil has done similar projects in South Dakota, Rochester and St. Paul. He had been working with the city for the past year to find a suitable location in Austin before choosing a spot on 21st Avenue Northwest, behind Runnings.

Stencil was originally looking to build in the Downtown area, but it would have required acquiring multiple plots of land, some with houses on them.

“That became a roadblock for Downtown area development,” he said. 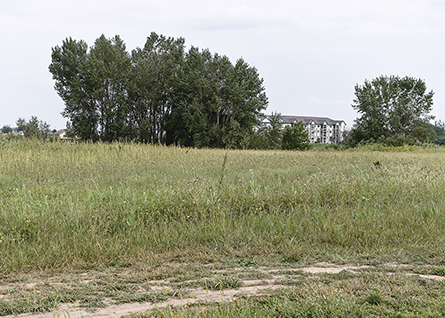 The new 82-apartment complex will go up on this land behind Walmart and adjacent to Village Cooperative. Eric Johnson/photodesk@austindailyherald.com

Should the county board approve the abatement request, Stencil will have to get a building permit, provide plans and specifications, and work out site conditions, such as soil boring tests.

“We’re doing everything we can to start this fall,” he said. “We have a lot of items to accomplish to get that started this year, but we’re confident.”

Stencil said he hoped to have the development open to tenants by fall 2019.

“Just strictly looking at our most recent housing study, the market rate units they outlined said the need was 207 units between now and 2025,” he said. “Those 82 units represent 40 percent of the demand, and that’s why we’re so excited to see this project. We’ve seen some good indications from our housing tax abatement program and some good strength in the private market. Anytime a developer is willing to build without having an in-user occupy out of the gate, that show’s they’re confident in the market.”

“The market rate, multi-family apartment has been a little more elusive, so to see something like this come forward is extraordinary,” he added.

An artist’s rendition of the new complex that will go up behind Walmart and Runnings. Photo courtesy of Kaas Wilson Architects

Clark said that some discussions on rent prices have been held, but no decision has been reached yet since that decision lies with Stencil.

If all goes according to plan, the development will be open for tenants around the same time that Slaby and Associates hopes to have new retail outlets opened in the renovated former Hy-Vee location.

“Economic development has predominantly been focused on job creation,” Clark said. “We’re seeing upward pressure on wages and that’s good for housing. Having a good paying job is the best housing program; having people be able to afford the market rents that will be in play in this instance is a real good thing to the general economy and Austin. Those that might not be living in Austin will have an alternative, and that is huge for economic development as far as retail is concerned; having a client base that is shopping in your community. Anytime you’re living in a community, your likelihood of doing that increases exponentially. That’s why it’s so important when people call Austin home.”