Austin’s Part II juvenile crime rate was the fifth highest in 2017, according to a report released by the Minnesota Department of Public Safety and the Minnesota Bureau of Criminal Apprehension.

“Part I are your major crimes, like murder or rape,” said Austin Police Chief Brian Krueger. “They’re the more violent crimes. Part II are less violent for the most part.”

According to the report, the Austin Police Department reported 98 Part II juvenile crime arrests in 2017. That is a crime rate of 397 crimes per 100,000 people.

Krueger said the reasoning behind the high arrest rate is difficult to pinpoint, but indicated that how other police departments handle juvenile arrests can vary. 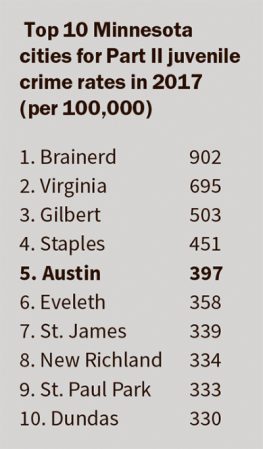 “Whether or not an officer in a community the size of Rochester takes juvenile shoplifting reports like we do or if they handle things differently in a department that size, I couldn’t speak to that, “ he said. “All I know is that our officers try to be proactive and handle the call volume they are assigned to as well. I don’t have a great reason why ours is higher than Rochester when their population is larger than ours.”

“My perspective, at least on the juveniles, is partly the family dynamics,” said Mower County Chief Deputy Mark May. “I think we have more families that are not a two-parent family or, if they are, both parents are working, so they have kids that may not be properly supervised. If you’ve got one parent, maybe they’re not listening to that parent.”

The Mower County Sheriff’s Office is responsible for transporting arrested juveniles to a detention center. May said that in some cases, there is uncertainty if parents will show up to juvenile court hearings.

“Mom or dad may not show up for the court hearing itself,” he said. “I’ve had some cases where I’ll ask a child, ‘Do you have mom or dad showing up?’ ‘Well, I don’t know.’ So I’ll call a family member up and tell them about the court time and they may say, ‘Well, we’ll try to make it.’ To me, when I run across families like that it’s heartbreaking because here you have a juvenile going to court and no one is showing up for the child and it ties the court’s hands because sometimes those are serious offenses the child is involved in. Or it could be the child’s first time getting into trouble and he or she could go back home with a family member, but there’s no family member there to release the child to, so the child gets placed in a detention facility until a parent can come. Usually, that child will have to wait 36 hours to get a court hearing.”

In some cases, May said, corrections is dealing with a juvenile’s parent, placing a burden on the county.

“It’s sad,” he said. “I don’t know why it is with Mower County, but we do have a lot of kids, even going past the arrests. If you look at the corrections aspect of it, like out of home placements, the cost it’s incurred the county for those types of kids is pretty high compared to other counties too.”

Krueger and May did not believe the arrests were the results of a lack of activities in the area.

“There’s plenty of things to do; it’s what you want to make of it,” May said. “We’ve got the parks and trails systems in town. We’ve go the rec center being built; we’ve got the Y. There’s the skate park; when I walk my dog, there always seems to be kids out there on skateboards and bikes. There are things to do in the community that don’t cost money.”

Krueger said the crime rate fluctuates from year to year.

“Each individual year, statistics are great to keep track of what’s going on out there, but over the years we see ebb and flows in those numbers,” he said. “Some years are definitely worse than others, while others are better. Weather can play a part in it, whether or not kids are cooped up and can’t get out and play. This year, we’ve had a really warm July, so it’s difficult to pinpoint an exact reason for some of these statistical numbers.”