Recent confusion over the legality of all terrain vehicles (ATVs) and utility task vehicles (UTVs) on Austin roads has led to an effort by the Austin Police Department to make the public aware of statutes regarding the vehicles.

“Based on our information, and after taking a look at some of the statutes that apply to these types of vehicles, (we’ve determined) that they would not be legal on our city roads unless the city adopts an ordinance permitting their operation, which we currently do not have,” said Austin Police Capt. David McKichan. “That is what we have been advising people who are driving ATVs and UTVs.”

The APD recently posted on Facebook that this stance “includes those that have lights, brake lights, turn signals, and DNR license plates.” 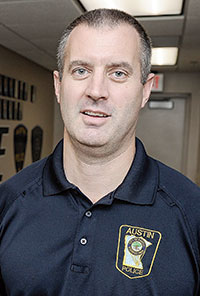 “Our biggest thing is we want people to operate them in areas where it is legal. Currently, in Austin, we do not believe it is.”
– David McKichan,
Austin Police Captain

“There are many types of vehicles in existence, mini trucks, UTVs, ATVs, scooters, mobility scooters, motorized bicycles and each has its own special laws assigned to them on where, when and how they can be ridden,” he said. “The specific one we’re addressing is UTVs, but mini trucks are under the same ordinance, ATVs are covered, golf carts would be under this ordinance. You have multiple vehicle types spread across several different areas of statutes.”

When it comes to purchasing such vehicles, McKichan hopes potential owners can obtain the correct information.

“You do want to hopefully go to the source of information on the legality that is going to give you the best source possible and hopefully at the end you’ll be able to demonstrate to someone who wants to purchase it a copy of the statute or ordinance for your particular city,” he said. “It’s different from buying a car. In some of these other types of vehicles there are specific rules and there are times when a city does not have an ordinance permitting these types of vehicles.”

The APD has encouraged citizens who disagree to voice their concerns to the city of Austin or their local representative.

McKichan said a proposed ordinance could be brought before the city council on the matter.

“We are in the process of taking a look at ordinances that other cities have so the City Council can digest an ordinance that we put together and see if it’s something that they would want to have in the city of Austin,” he said. “As things currently stand and how we interpret the law and how our attorneys have advised us of how the law reads, they are not currently legal. It could change, depending on the council’s view of the matter.”

Until then, McKichan said the APD plans to continue making the public aware of its stance.

“We are stopping and advising folks of it,” he said. “Our goal is public safety and that the roads are safe. As part of that, we are allowed to issue citations. We’d prefer not to do that and, because it is a little bit confusing, those folks that we have seen operating we have tried to educate and warn them. “I can’t say that is going to continue going forward, and we may issue citations, but our biggest thing is we want people to operate them in areas where it is legal. Currently, in Austin, we do not believe it is.”