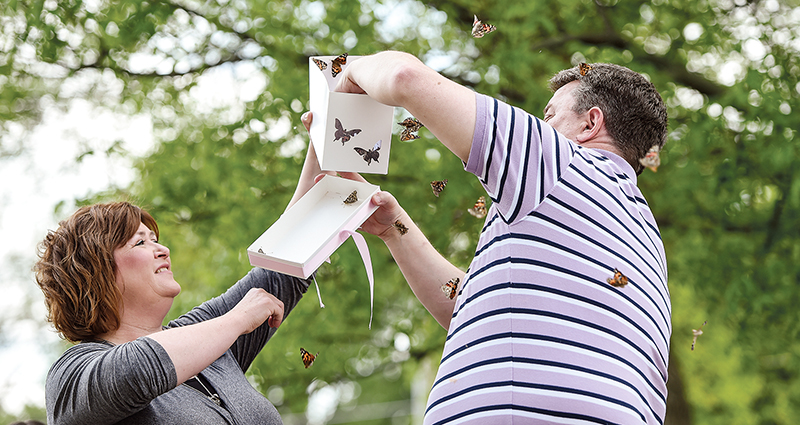 Butterflies were released Tueesday afternoon outside of St. Marks Living, in conjunction with Heartland Hospice as a memorial for loved ones who have passed away in the past year. Photos by Eric Johonson/photodesk@austindailyherald.com

The Rev. Josh Johnson said it is always difficult to mourn a loved one’s passing in simple words.

But the symbolic act of releasing butterflies is a type of mourning we can embrace.

Letting go is hard, he said, memories of our loved ones, like butterflies, comback to us.

It is not unlike the case of the monarch butterfly, that “when we long to know winter won’t last forever … these butterflies start to come back to us.”

Johnson, spiritual coordinator for Heartland Hospice, spoke to a large group of hospice staff, St. Marks Living residents, staff and families who lost loved ones over the past year, during a butterfly release memorial ceremony at St. Marks. The hospice and St. Marks have partnered on the ceremony for the past decade. 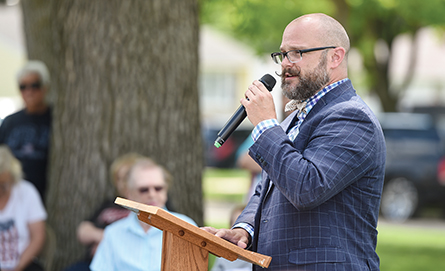 “It is a glorious day to remember our loved ones,” Johnson said.

He spoke of the death of his own father, and how difficult that was for him.

So he told a story.

“My father was an avid pheasant hunter,” he recalled.

He remembered a particularly tough morning. He was driving down a road at sunrise,  and it reminded him of his father, and how he would have loved that morning.

“I missed my dad so much,” he recalled – but as he drove further, he found the road almost blocked by a flock of pheasants.

It is the same with butterflies, he said, whose flights remind us that there are times “when you have to let the butteflies fly.”

But there are times, as well, “when they’ll return when you need them the most,” he said.

During the ceremony, about 60 names were read of those who passed this year.

Then, a box filled with over 100 butterflies were released to the sunny afternoon. Darlene Feltes, the administrator of Heartland Hospice, said the ceremony was traditional and had been held at least 10 years.

While hospice cares for those facing the end of their lives, they also care about those who are left behind.

“This is a nice opportunity for those who have lost their loved ones,” she said.

One of them was Susanne Lerum of Austin, who lost her mother, Gloria Jacobson, in September.

“I’ve always loved butterflies, so I thought this was so great,” she said.