Marlin E. Miner, 75, of Blooming Prairie, Minnesota, passed away Wednesday, May 16, 2018, of respiratory failure at Mayo Clinic Health System in Austin, Minnesota, with his wife Jan and kids by his side. 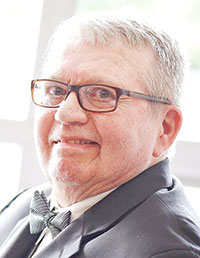 Marlin Everett Miner was born Aug. 3, 1942, at his home in Hayfield, Minnesota, to Everett and Harriet (Boe) Miner. He was a 1960 graduate of Blooming Prairie High School. On Sept. 8, 1968, Marlin was united in marriage to Janice Elaine Lebakken at the First Lutheran Church in Blooming Prairie. The couple made their home in Blooming Prairie and together had four children. He was a seed corn dealer for many years and also farmed and milked cows. Along with farming, Marlin worked for the Central Co-op in the LP department. In 1970, Marlin started Miner Salvage, a snowmobile salvage yard and repair shop. Miner Salvage evolved into Miner’s Outdoor, where Marlin was not only an owner, but where he worked part-time after his retirement from Central Co-op in 2005. In 2010, Marlin suffered a stroke, and has been home with his wife since. Marlin played an important role in his grandkids lives. He was a very smart man; Marlin would always have an answer to any question you would have asked him and was always right. He was a man of many words and knew just about everyone. Marlin had a love for Nascar Racing; every year he would travel to the Daytona 500 in the “Toter.” He was a lifelong member of the Blooming Prairie area and of First Lutheran Church. Marlin will be dearly missed by all who knew and loved him.