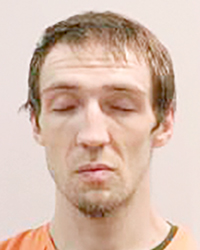 Ryan Jeffrey Himli, 37, of Rochester was charged on Wednesday in Mower County District Court with felony violating a domestic abuse no contact order within 10 years of two or more convictions.

According to court documents, police were called to a domestic disturbance at 8:02 p.m. on Monday in the area of Seventh Street and Third Avenue Northeast. An officer made contact with Himli and a woman on Seventh Street Northeast and had them stop near his squad car as the other officer arrived.

One officer spoke to Himli, who initially denied that an altercation occurred between him and the woman, according to court documents. He allegedly said he believed she had stolen a speaker that belonged to a friend and that he was trying to see if he could locate it. He then allegedly changed his story, saying she had stolen $20 from him and he was attempting to get it back.

Himli admitted he was not supposed to be in contact with her because of a domestic abuse no contact order, according to the court documents.

Himli will appear in court again on May 29.