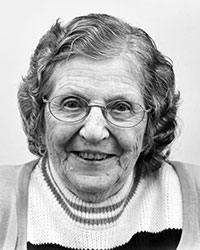 Lillian Marie Grundmeier (Klaehn) was born in Marshall Township, Mower County, near Elkton, Minnesota, on Sept. 19, 1916, to Frank and Irene (Rothenburger) Klaehn. She was baptized at St. John Lutheran Church near Elkton. She grew up and attended school in Elkton and graduated as valedictorian of her class. She became a country schoolteacher in Mower County and, in later years, Kanabec County. She married Roy Grundmeier on Aug. 23, 1936, at St. John Lutheran Church near Elkton. That marriage lasted 66 years. They farmed near Elkton, Grand Meadow, Minnesota, Dexter, Minnesota, and Sandstone, Minnesota (Dell Grove Township). In 1998, she and her husband moved to the Sandstone Square Apartments. After enjoying many years with friends there, she moved to Elderwood Assisted Living in Hinckley, where she lived until her death.

She had a love of the country and beauty of the outdoors and a strong Christian faith. She was a member of Emmanuel Dell Grove and Grace Lutheran Churches. After teaching, she worked as a clerk in Drilling’s Coast to Coast store, as a secretary at Watrin’s Distributing, clerk of Dell Grove Township and a dedicated volunteer of the church. She was employed by Frank Loken and Jean Boyer as a tax preparer.

Lillian was preceded in death by her parents; husband; three brothers; one sister; a grandson; nephew; niece; and many relatives and friends.