A mom to be admired

George A. Hormel had great respect and regard for his mother, Susanna Decker Hormel. Of her he wrote, “My mother’s beautifully-kept and managed house was like a quiet haven to a storm-swept wayfarer.” Her commitment to quality and demand for perfection influenced George’s management style and ultimate success. 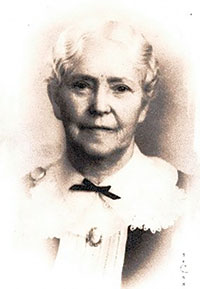 In honor of Mother’s Day weekend I have included her obituary printed in the Mower County Transcript on Aug.t 24, 1910.

“Mrs. Susan, widow of John G. Hormel, died on Saturday morning, August 20, 1910, at her home on South St. Paul Street of heart trouble, aged 73 years. She was seriously ill for less than a week as she attended church the previous Sunday.

Susan Decker was born in Neuweid, Germany, November 15, 1836, and at the age of 15 came with her parents to Buffalo, New York. She was married there on December 28, 1856 to John George Hormel. Ten years later they moved to Toledo, Ohio, where they lived for thirty years. They moved to Austin 15 years ago and Mr. Hormel died here in May, 1896.

Mrs. Hormel has since resided here where most of her children reside. She was raised in the German Reformed church but united with the Presbyterian Church in Austin. She was a woman of fine mind and temperament. She was devoted to her home and family and her influence for good was powerful.

Those who knew her best found a stimulus to better thought and better life. She was beloved in the home circle where she labored untiringly for those whom God had entrusted to her care, and she earned a well-deserved reward in the devotion of her children.

Funeral services conducted by Rev. J.P. Davis and Rev. F.E. Knopf, were held at the residence of George A. Hormel on Monday afternoon. Interment in Oakwood.”

Wishing a reflective, relaxing, and enjoyable day to all mothers on this special day.

History at Play, A History for Half Pints event

Enjoy activities and play from the early 1900’s. Free.

Free for members of the HHH, Friends of the Library, or the Mower County Historical Society.

Austin’s history was made by many people whose names we see around town or hear about in conversations of the past. In this presentation we will feature information about the Ellis family and their Evergreen Farm. The home of Jay C. and Germaine Hormel, now known as Gerard Academy, will also be featured.

Hearth & Home Series: Gardening and Self-Care, What Do They Have in Common

Led by Jaimie Timm of the Mower County Historical Society. Cost is $8 for members of the HHH or Historical Society and $10 for nonmembers. Limited to 15 per tour. Tickets available at www.hormelhistorichome.org/calendar.

Cotillion Dance Club May 1 brought 36 cotillion members to the Austin Country Club a very rainy night for an... read more