The view from above; Drones becoming farmer’s next best friend 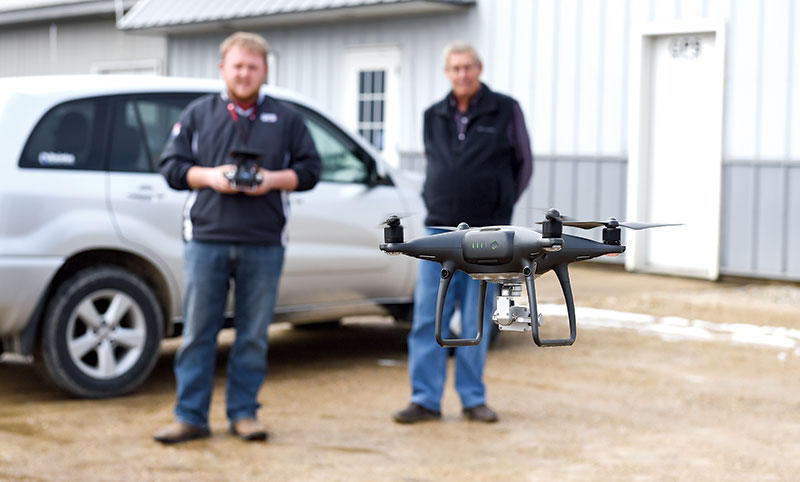 A drone lifts off under the guidance of crop consultant Dan Gerlach behind Farm-Tech/GPS Services of Adams. Eric Johnson/photodesk@austindailyherald.com

The drone, first thought of as an odd toy by many, has quickly become the farmer’s friend.

From checking irrigation issues and manure applications, to scouting for plant disease to mapping tile lines, drones are making a definite difference in the way farmers look at their fields — or even livestock.

Three gentlemen from Farm-Tech/GPS Services of Adams — President Lynn  Lagerstedt- — crop consultant Dan Gerlach and parts and service manager John Krull gathered recently to chat about drones. They are not only dealers in the technology, they have watched the technology grow — and grow quickly, said Gerlach.

While most of the uses would have been done by a small airplane some years ago, drones have advantages — both technically and in cost.

Gerlach said the array of uses is what is bringing more drones into the hands of farmers.

“Those who own drones now can see the value; they’ve also gotten cheaper and easier to use,” said Gerlach. 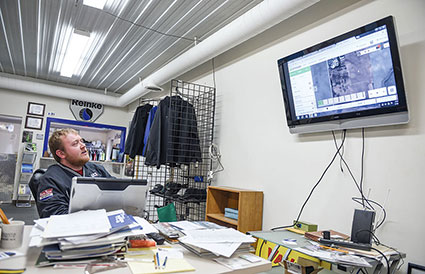 And the uses are myriad. One important one is maintenance and inspection, Krull said. Farmers with irrigation systems, for instance, may not see a plugged nozzle; from the air, however, where it is easier to see a spray pattern, “you can easily see the problem,” he said.

“Or perhaps a flat tire” on the system, Lagerstedt said.

“If a nozzle stops when the corn is up, you can’t always see the problem right away,” Krull said. “It’s a huge time saver. You could water half a season with half a spray and that could affect yields on that swath.”

The drone can use an array of filters that can be used to detect a variety of issues, or for their help in mapping.

For instance, tile lines can be mapped, due to a filter that helps detect darker and lighter areas of soil, that provide an image that looks like the lines themselves. Being able to map a tile field, for instance,  “is huge,” said Gerlach.

As in the case of old city sewer lines – which often are broken by unsuspecting utility crews due to old or absent mapping — drain tile laid long ago often was not recorded or records were lost. It’s hard to replace tile when you don’t know where it is. Mapping can see the images created by the wet and dry soil.

Other filters often detect misapplications — of manure or nitrogen, for instance.

“From the air, you can see that really well,” said Gerlach, showing an image to demonstrate the thought. You see from above a field with  some obvious damage. Gerlach said it was enough information for the farmer to realize there was a distribution issue when he spread manure.

Plant disease, infestations and weeds can all be detected with drones, said Lagerstedt.

The best benefit of using drones may be its scouting aspect, said Gerlach — detecting issues before the corn gets too high.

As well, information gathered in one growing season can provide important information that can be used to develop or choose different approaches in the next, said Gerlach.

There are even applications for livestock, said Lagerstedt. Simply finding a lost animal is one; there are drones that can pinpoint the temperature of different parts of one animal – a way to detect illness. Drones also herd animals. 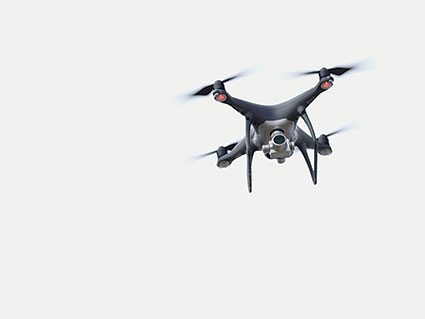 Drones are playing a big part in the future of agriculture, used by farmers and crop consultants to check the welfare of crops.
Eric Johnson/photodesk@austindailyherald.com

The men all sell drones through their business; an average price ranges between about $700 and $2,900, although you can purchase others below and above — well above — that top price.

The Phantom Pro, made by DJI, that he used to demonstrate a drone’s ability does give a newcomer pause — not only does it know when to return to the user when its battery is low — it won’t go so far that it could not return with power — it will also return to the same spot from which it left.

“I could even try to fly this into the side of a barn, even into me, and it won’t do it,” Gerlach said. “It will avoid a collision every time.”

The cameras on today’s drones have high resolution; video can be frozen for still photos, Krull said.

The drone resets its computer with each startup and this one’s particular range was four miles. Getting used to operating one takes — well, no time, said Gerlach.

“When a customer comes in, once they have that controller in their hands and they play with it for awhile, they usually have a big smile on their face.”

And, for a growing number, they usually leave with a drone in tow, too.