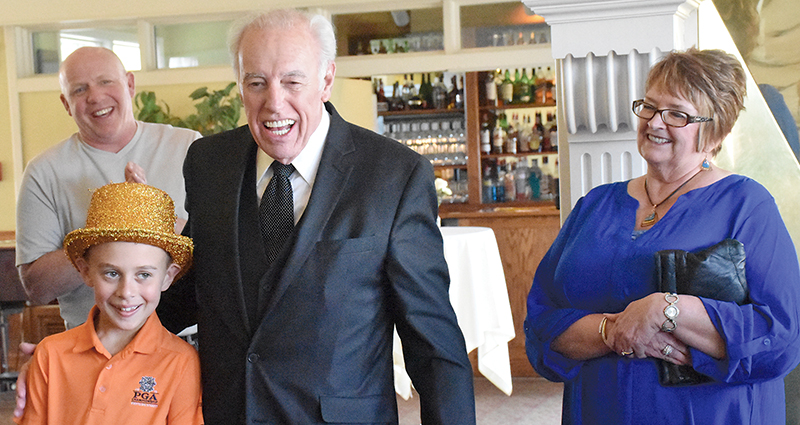 Family members share a laugh as Forrest “Frosty” Miller realizes that the party they were attending at the Austin County Club Thursday was really a retirement party for his wife Lois, right. At far left is Frosty’s great-grandson, Mason. Photos by Deb Nicklay/deb.nicklay@austindailyherald.com

Just about everyone knew Lois Miller was going to retire on Thursday.

Lois had worked for 39 years (“and two months,” she said) as a financial counselor for Drs. Elrod, Green and Heimer, DDS, and Thursday was her going-away party at the Austin Country Club.

Everyone knew, in fact – except her husband, Forrest “Frosty” Miller.

Frosty thought he was attending an employee appreciation dinner arranged by the dental office.

However, when he saw their children and grandchildren, his mouth fell open, and he finally saw the party for what it was: Lois retirement party.

There was a reason for keeping him in the dark. It was about — albeit humorous — payback. Frosty, who had served as a cop, a police chaplain and had worked security for Homeland Security, kept his family in the dark for a bit when he decided to take it easy.

“He was retired for two weeks before he told us!” emphasized his daughter, Tori Miller. “His squad car sat in the driveway and we couldn’t figure out why it hadn’t moved.”

“He’s been talking about me retiring for a long time; he’s older than me you know. He kept asking over and over, ‘When are you going to retire?’ … I’d say, ‘Stop talking! I’ll retire when I want to,” Lois said. 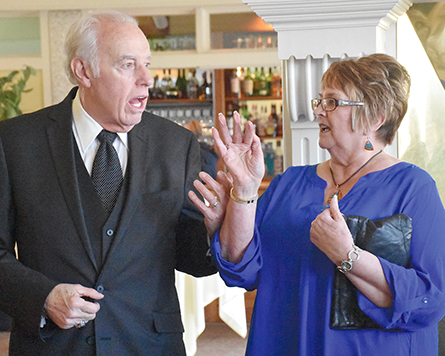 Forrest “Frosty” Miller, left, talks about his wife Lois’ “retirement surprise” during her party Thursday at the Austin Country Club while she gives her version of the events – and both were hilarious. Frosty thought he was attending an employee appreciation party for Lois’ job – only to find out it was a retirement party.

Frosty had another version:

“I kept telling her to retire, so we could travel to Arizona but she couldn’t tear herself away. I finally said, ‘Then I’m going to go without you.’”

“Which he never would have done,” said Lois, rolling her eyes and then laughing. His eyes twinkled, too.

On Feb. 18, she finally decided — but only told the kids. They did not quite believe her.

Kathy Green, wife of Dr. Peter Green, said the pair had been a joy to know over the years.

“Lois was part of the original staff,” she said, shaking her head. “And together? They are a hoot.”

Bridgette Trimble, also a front desk staffer, said how much the team will miss Lois.

“We hugged and got teary. She said, ‘I’m just so glad we got to make each other laugh,’” Trimble said.

You get the feeling laughter will be the wind upon which Lois and Frosty will sail into retirement.

“She is so funny and we are so glad she’ll have this time for her family and friends. She is literally so young at heart and deserves it.”