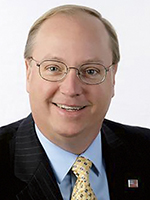 Republican congressional candidate Jim Hagedorn visited Austin on Thursday to meet with city, county and civic leaders in what he calls “thought leader” meetings. The purpose of the meetings is to hear about what is going on in the area.

“We’re putting them together all across the district,” Hagedorn said. “We try to do them in all of the counties and the bigger cities. We’re going to try and continue this as long as we can.”

Hagedorn met with Mayor Tom Stiehm and City Administrator Craig Clark, among others, and also toured The Hormel Institute.

During his meetings throughout Minnesota’s First Congressional District, Hagedorn has found some common issues among the various communities.

“If it’s on social work or education or things like that, it’s kind of two-fold,” he said. “One is that they’re not happy about unfunded mandates from the federal and state government. Rules come down, but then there’s no money to follow through. That could be for special education, some of it could be for other things such as welfare programs. I think overall there’s been a complaint that there’s too much regulation. When it comes to law enforcement, we hear a lot about how illegal drugs are creating issues in the community and a lot of crime. Mental illness is an overriding factor on both sides; people who are disturbed or in need of treatment creating problems not just for themselves, but for society as well.”

Hagedorn ran for Congress in 2014 and 2016, both times against incumbent Tim Walz of the DFL. In 2016, Walz won by 0.8 percent. With Walz running for governor and not seeking re-election to Congress, national political pundit organizations “Inside Elections” and “Crystal Ball” have named Minnesota’s First Congressional District as the most likely Democratic seat to switch to Republican in 2018.

Despite this, Hagedorn still plans to keep campaigning.

“There is no incumbent, but we still have to go out and make our case and show people the other team isn’t going in the right direction,” he said. “We don’t take anything for granted. The Democrats lose a lot of advantages when Walz’s incumbency leaves the race; the name, the connections, the money, the experience, the organization, the fact that Tim was a unique character in many ways and had a great story to tell when he came into the race and he also took positions that fit the district. Most people forget in 2006 he ran on border security. It was one of his big issues. He was talking about stuff he thought people in Southern Minnesota wanted to hear. With Tim off the ballot, some of those advantages come our way. We have a great organization to be in a position, in a grassroots way, to win the district.”

Hagedorn pointed out that other congressmen, such as Newt Gingrich and Minnesota’s own John Kline and Collin Peterson, ran several times before winning their seats.

If elected to Congress, Hagedorn said the first thing he would do is support a Republican for House Speaker.

“If the Democrats take over and (House Minority Leader Nancy) Pelosi gets the gavel, they’re going to work to impeach President Trump and everything’s going to come to a grinding halt,” he said.

Second, he would request the leadership of the steering committee to place him on the Agriculture Committee.

“This is an agriculture-based economy in our district,” he said. “Even the bigger cities thrive and depend on agriculture and so does our rural way of life. I’d like to be on that committee to help sustain agriculture and help support farmers as best as possible and do everything we can to drive economic development in the rural communities.”

Hagedorn said he wants to make his position clear and let the people decide.

“I don’t try to pretend I’m something I’m not,” he said. “I’m a conservative Republican that wants to partner with President Trump, the Republicans and like-minded Democrats in Washington to make the changes necessary and keep the country safe, make us prosperous, and protect our God-given rights.

“I ran the last campaign on a parallel track with President Trump. We’re right down the line on almost all the big issues. That’s where I am; the same person, same ideas, forward thinking and looking to make the big changes in Washington.”