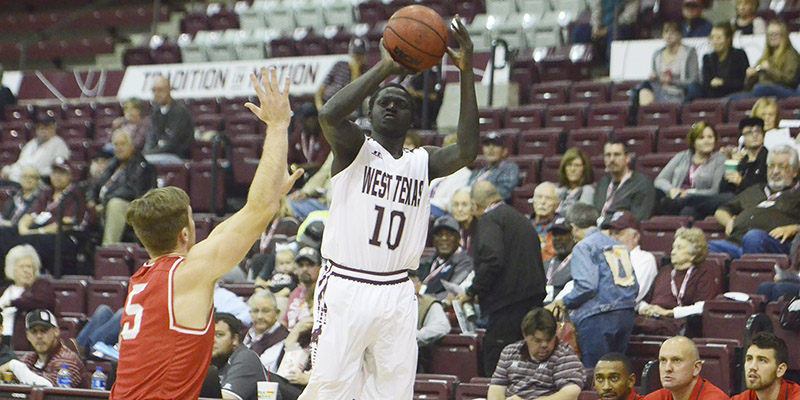 Austin grad Gach Gach pulls up for a jump shot for West Texas A & M this season. Photo provided

It takes some time to make a big change and the Austin boys basketball program has certainly made some big changes in the past decade. In that time span, the Packers have gone from playing in front of half-empty crowds with a sparse student section to playing in sellout crowds in Packer Gym.

When Austin advanced to its first state tournament in a 30-year stretch back in 2012, the Packers set the ball in motion for a program that has caught fire. The Packers have played in four of the last six Minnesota Class AAA state tournaments and they’ve finished in second place in three of those tournaments.

Austin has played in 30 state tournaments in school history, winning three state titles with the last one coming in 1958, and the latest run of Packer teams has brought back some of that winning attitude. Austin head coach Kris Fadness, who has over 400 wins in his career and over 300 wins with the Packers, has seen the program grow vastly in the last few years.

“Basketball has always been big in Austin; no doubt the winning of late and attention our program has gotten from media and others around the state has helped,” Fadness said. “We play an up-tempo exciting brand of basketball to watch and our student body has turned our home games into a party. Young kids see this and want to be part of it so our summer camp numbers have improved. The diversity in our school has been a positive for our program.”

If the return of basketball prominence in Austin had to be to be reduced to a single play, it would no-doubt be the buzzer beating alley-oop pass from Zach Wessels to Tom Aase that put the Packers past New Prague and into the state tournament in 2012. Aase and Wessels are now wrapping up their college basketball careers at the University of Sioux Falls and they’re well aware of the basketball tradition that has picked up in Austin.

“We didn’t have a lot of people come to the games in my freshman season [at Austin],” said Wessels, who is Austin’s all-time leading scorer. “That was kind of hard. As we started to win, people started to come. I think it’s cool that the student section is packed every game now. It wasn’t always the thing to do and it’s kind of cool that we started it.” 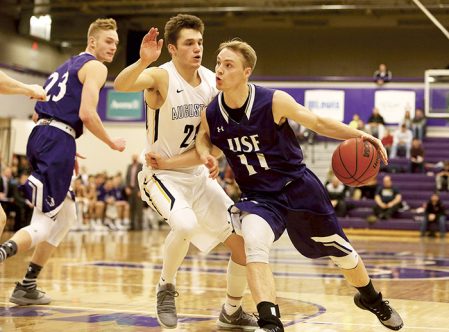 Ausitn grad Zach Wessels, playing for the University of Sioux Falls, drives to the basket past Steven Schaefer from Augustana University during their game Dec. 31, 2017 at the Stewart Center in Sioux Falls, SD. (Photo by Dave Eggen/Inertia)

Aase isn’t willing to take all of the credit. While the current group of Packers looked up the teams that went to state in 2012, 2013 and 2014, Aase and Wessels had role models of their own, including Austin grad Connor Gunderson, who played four solid seasons at St. Olaf College after his Packer career.

“It’s pretty awesome,” Aase said of Austin’s basketball success. “Every year they’re in contention for state tournaments and conference titles. I think each group of younger guys looks up to the older guys. We looked up to Connor Gunderson and those guys to see what was right.”

Austin grad Bret Lukes, who is finishing up a four-year basketball career at Hamline University, also has fond memories of playing with the Packers.

“I was very lucky to have quality teammates and coaches that made my experience very special. It was fun to win too,” Lukes said. “It’s really fun to watch them play now too with how athletic the team is. They are competitive when they meet a challenge.”

End of an era

Aase and Wessels have been teammates for nearly two decades and they originally started playing together at the youth basketball level. They are now finishing up their basketball playing days as Aase will begin working at Hormel Foods in Iowa as a quality control supervisor when he finishes school and Wessels is looking to continue his education for physical therapy next year.

Wessels said it’s tough to see basketball come to an end, but he’s glad he’s going out with one of the best seasons the Cougars have put together in his four years there.

“It’s been great. There’s been some downs, but a lot of ups. It’s been a quick four years and it just flies by,” Wessels said. “I like to win and that’s a big plus.”

Aase said that being a college basketball player carries a big commitment of time and effort. There are offseason workouts, daily lifting sessions, long practices and long road trips. But he’s enjoyed it all.

“It was a lot of fun. I remember being with my teammates. You don’t remember the games as much as you do hanging out and developing really good bonds with those guys. It’s not as much as the basketball stuff as you think,” Aase said. “It’s obviously sad [to be done with playing with Wessels.] I can’t even count how many years that we’ve been playing together. He’s the ultimate teammate, he’s such a great guy and he always puts the team first. He’s not about stats and he’s about wins. I’ll miss being on his team and I’ll miss all of the guys on this team.” 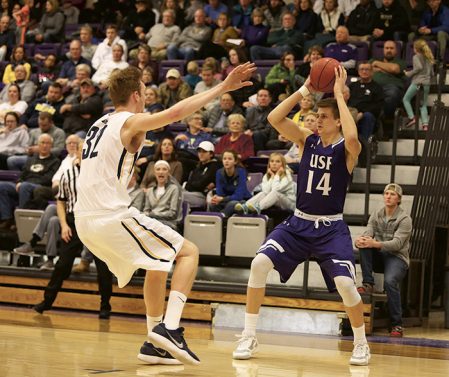 Austin grad Tom Aase controls the ball for the University of Sioux Falls against Augustana this sesaon. (Photo by Dave Eggen/Inertia)

Aase also thanked his family and friends for supporting him along the way in his basketball journey.

Lukes, who is looking towards a career in general business or agriculture after school, said he has enjoyed his four years playing with the Pipers. Hamline beat St. Thomas University twice while Lukes was there.

Lukes said he made some good friends on the Hamline team that he plans on staying in touch with throughout his life. He also enjoyed the competition of playing at the college level.

“The MIAC is a strong conference which made every game a challenge,” Lukes said. “Although it was challenging at times, balancing academics and athletics allowed me to develop the necessary skills to be successful in a professional work setting.” 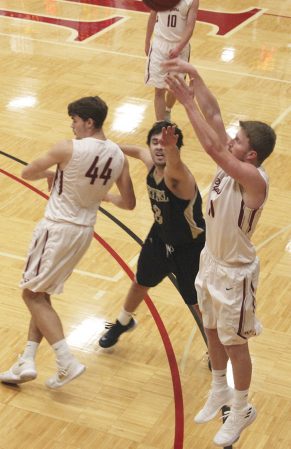 Austin Bret Lukes pulls up for a jump shot for Hamline University this season. Photo provided

Since Gunderson, a 2010 Austin grad, signed to play at St. Olaf, plenty of other Packers have followed suite. At least 10 former Packers have gone out to play at that college level in the last seven years and six of those players have earned an athletic scholarship.

“You hope that as a coach you can instill or feed a passion for the game that they will continually want to better themselves as a player,” Fadness said. “You hope they want to continue playing as long as they can. We like that basketball can give some of our kids an opportunity to get an education and go to an institute of higher learning.”

Austin grad Gach Gach put in two seasons at North Dakota State College of Science and he is now playing at West Texas A & M, a nationally ranked Division II team. Gach has learned as much off the court as he has on it in the past few years.

“In high school in my freshman and sophomore years, I was basically a player first and I didn’t take school head on until the end of my sophomore year,” Gach said. “In college, it’s painted a bigger picture that you need that backup plan and you need an education to do that. It’s opened my eyes. I need school so I can have a really good job.”

Gach is hoping to become a teacher and possibly a coach after college, where he’s also learned to be a very effective player with the Buffs.

“[Playing at the next level is] what everybody dreams of,” Gach said. “When you get the opportunity you have to make the best of. Once you leave high school, there’s greater things and the sky’s the limit. The ultimate motivation is to continue playing as long as possible, but at the end of the day you’re not going to be playing basketball forever. It’s only a small window.”

Austin grad Oman Oman has followed in Gach’s footsteps as he’s now playing at NDSCS, with the hopes of landing a scholarship at a four-year school. Oman has gained focus as the game has gotten faster and more athletic at the next level.

“There’s really not much to do but basketball and school here,” Oman said. “I feel like I’ve been working more to get more shots.”

Oman said he found his inspiration to pursue college basketball when he watched Aase and Wessels in the state tournament.

“It was really fun watching them and I wanted to be a part of that someday,” Oman said. “I feel like we showed that we can get back to state and hopefully guys keep continuing that legacy and keep going to state. Then I saw Gach and AJ [Nywesh] make it out [to college] and I figured I could too.”

It’s likely that Oman also left an impact on the current Packer team. While they’re pursuing another trip to the state tournament this season, plenty of these Packers also have a chance to play at the next level. Duoth Gach and Moses Issa have both received scholarship offers from NJCAA Division I schools and Tate Hebrink and Nyagoa Obany have also generated interest from colleges. Former Packer Both Gach, who transferred to Arizona Compass this season, has also received interest from college teams.

Gach Gach is keeping a close eye on his younger brothers and the other Packers who are looking to play at the next level.

“I’m looking at the scores for Austin boys and Austin girls basketball every single night and I’m following them here in Texas,” Gach said. “I hope they can keep it going. I wish all the student athletes the best, no matter what level they’re playing at.”

Ask any former Packer boys basketball player where the team’s success has come from and they’re very likely to give credit to Fadness, who has done a lot to build up the Packer basketball program.

Aase recalled Fadness driving players around Austin in his van and he also recalled the times Fadness went out of his way to help his players in every aspect of life.

“I feel like he cares a lot about these guys,” Aase said. “He puts in so much time. He helps them off the court, financially and in the classroom.”

Wessels was brought up to the Packer varsity team as a freshman, and he credited Fadness for pushing him from the start.

“I would give [Fadness] a lot of credit. He’s a great coach and a great guy,” Wessels said. “He was tough, but he made it fun. I miss playing for him.”

Gach said that Fadness was crucial for him as a player and a student.

“Coach Fads helped me tremendously in making the man I am,” Gach said. “I’m trying to be successful as I can be.”