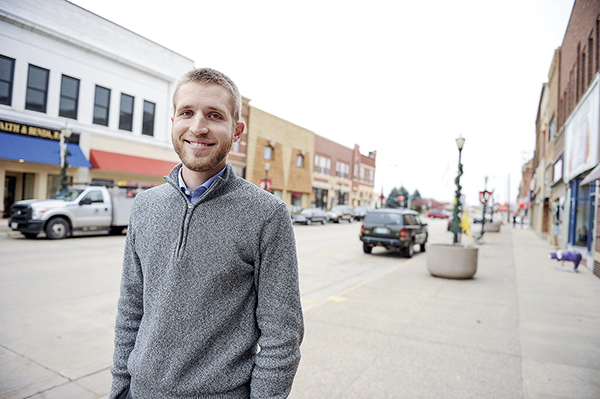 Greg Siems in 2015 took up the reins of Vision 2020, filling the job vacated by Laura Helle. Eric Johnson/photodesk@austindailyherald.com

Siems, who took over the directorship of Vision 2020 in November 2015, will be starting as the new assistant director of the St. Olaf College Institute for Freedom and Community on Monday. He announced his resignation from Vision 2020 during its steering committee’s Dec. 21 meeting.

Siems replaced former director Laura Helle, the current executive director of the Austin Area Commission for the Arts. Under his directorship, Vision 2020 saw the establishment of the Red Bike Program, the extension of walking and biking trails, continued support for downtown events and the Community Home Improvement Program, and the approval of plans for the new community recreation center.

“I got to meet a lot of great people here,” Siems said. “I’ll never forget the support they’ve given to me and to this community.”

“Greg has earned the respect of everybody he’s dealt with,” said Development Corporation of Austin Director John Garry, who is a member of the steering committee. “He’s an awesome guy and I know people are excited for him and his career. There is nothing but positive feelings about what Greg has done and the type of person he is.”

With Siems stepping down, Garry says Vision 2020 will undergo a period of evaluation.

“At this point it’s about evaluation and recognition of some of the accomplishments,” he said. “It’s a sense of ‘How did this process go for us?’ We want to ensure we’re learning from the process.”

He also said that it is very likely someone will be appointed to act as an interim director; however, nothing has been finalized.

Tim Ruzek Outreach Coordinator Mower County SWCD Citizens, including representatives of local groups, are being sought for service on a... read more