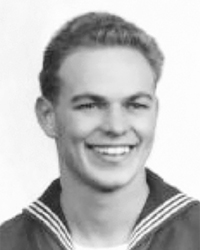 I was born on Sunday, March 13, 1921, in Austin, Minnesota, to Ralph and Lucy Maye Stevens. In addition to surviving them, my brother, Wayne Stevens just passed on at age 95. I have outlived my first wife of 30 years, Eva Mae Stevens, my second of wife of 32 years Joyce Ann Stevens, and my son, Brant Stevens – I sure miss him. On my last birthday, I was 96 years old. I died peacefully in the early morning hours of Dec. 21, 2017.

After growing up in Austin, I left Minnesota for work in 1941. After Pearl Harbor occurred, I enlisted in the U.S. Navy, reporting to duty on June 6, 1942. Except for a couple of years at Indiana University after the war, I would live in Kentucky until 2015, when I returned to live in Minnesota to be near my family.

My brother and I played Austin High School football, winning a regional state championship in 1938. I was called “Mo” during that time. As I mentioned above, I enlisted in the military. A guy named Jim Topmiller, from Bowling Green, Kentucky, and I met in signal school and were the only two Navy personnel assigned to a merchant marine ship, the S.S. Winslow Homer, whose initial trip with us as signalmen was traveling across the Pacific, the Subcontinent, and the Middle East. He and I would share signal duty on rotating four-hour shifts. In early 1944, Jim and I were stationed aboard the S.S. John Steele. We sailed around Africa and throughout the Mediterranean, and on D-Day, June 6, 1944, I was at Omaha Beach, assisting my ship as it dropped off troops, jeeps, and trucks for combat. I was so frightened and so surprised that I made it through without being physically wounded. I wrote about all this in my memoirs.

After discharge from the Navy, while in Bowling Green to visit my friend Jim, I met a girl, Eva Mae Stone, and so enrolled at Western Kentucky University to be near her, eventually earning a bachelor’s degree. Later, I obtained a master’s degree and a Rank 1 from Indiana University. I eventually married that girl in 1947 and we shared a wonderful life together for 30 years, until her death, and raised a fine son, Brant Vaughn Stevens.

In 1949, I joined the teaching staff with the Jefferson County Public Schools in Louisville, Kentucky, and subsequently became an assistant principal at DuPont Manual High School in 1954. Six years later, I was appointed principal of Highland Junior High School. In July 1970, I served as assistant director of certified personnel for the Louisville Board of Education. Shortly before and during the period of merger of the Louisville School Board and the Jefferson County School System (1971-1977), I was the principal of Semple Elementary School. During all this time, I taught part-time at the University of Louisville School of Education.

For several years, I served on the Louisville Education Association Board as well as the Kentucky State Textbook Association, on which I was involved in the selection of textbooks for the public schools. Initially, I was involved as a member, but eventually I held all offices in the Louisville Chapter of Phi Kappa International Professional Fraternity in Education and was a delegate to their international conference for several years. Over all these years, I felt pride that I was comfortable in my involvement with all areas of public education.

My hobbies included working on and preparing sport cars for concourse shows and auto crossings. As a member of the Kentucky Region Porsche Club of America, I was elected treasurer for a few terms. Joyce and I also joined the South Park Country Club and we enjoyed playing golf there. I was always interested in watercolors, but only made time for it later in my life. I truly enjoyed the creativeness of painting, and was prolific in my output. For many years, I would paint Kentucky winter scenes and used the art for our Christmas cards. I also loved reading. Until I was 83 years of age, I ran in the Kentucky Derby Mini-Marathon, often winning the senior division. Until some serious health issues arose for me at age 94, I worked out daily at the Jewish Community Center.

I have outlived most everyone in my world. I am survived by my brother Wayne’s wife, Mary Ann Stevens; my son’s wife, Sheela Stevens; and by my step-son, Alan Cheek (Deborah). Also surviving are my nieces, Sue Lynn McDaniel (Bob), Rebecca Mesenbrink (Brad), Melanie Misafir (Erol), Sheryl Watson (Jim), and Barb Germain (Mark); and my nephew, Tim Stevens (Cheryl).

I have donated my body for the training of medical professionals to the University of Minnesota School of Medicine. Eventually, there will be a private family service to celebrate my life in Bowling Green.

In lieu of flowers, my preference would be that expressions of sympathy be made to the Heartland Hospice Memorial, 1257 Second St. N., Sauk Rapids, MN 56379 (or online at heartlandhospicefund.org/donate), who took such good care of me in my last few months and days of my life.