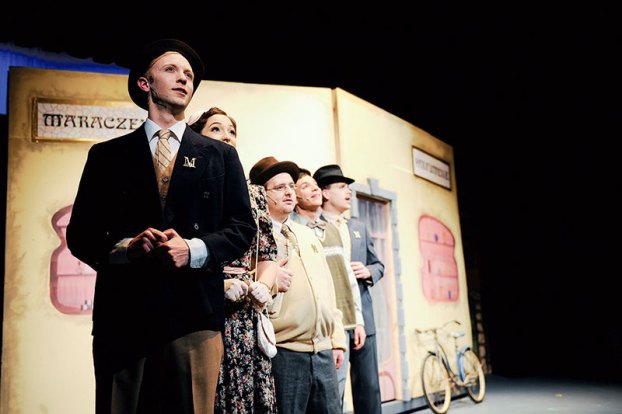 The Riverland cast of “She Loves Me,” from earlier this season. Herald file photo

Auditions will be held from 6-8 p.m. on Tuesday and Thursday at the Frank W. Bridges Theatre, Riverland Community College, Austin Campus, East Building.

“The Austin Immigration Project,” which is the tentative name for the show, will feature stories based on the experiences of Austin’s immigrant population. It will be directed by Susan V. Hansen.

“We don’t really know what it’s going to be until we get the stories,” said Riverland Theatre instructor Lindsey Duoos Williams. “We’re looking for people who are interested in being in the show, but we don’t have a script yet. We want anybody that wants to be involved to come, but it won’t be a conventional audition. If there are people who want to share their stories, we would love to talk to them, even if they don’t want to be in the show.”

“We’re open to anybody who wants to be a part of this show and share the stories of the immigrants,” she added.

“Avenue Q” is a Tony Award-winning musical Williams describes as “a ‘Sesame Street’ for adults trying to find their place in the world.” Williams will direct the show.

“It’s an adult show, so there are no children roles,” she said. “There are, however, very diverse roles, such as roles for black and Asian characters. It’s a very funny show. We will be providing music and doing some singing as well as reading for the auditions.”

Performance dates for “The Austin Immigrant Project” will be Feb. 28 to March 4. Rehearsals will begin right away and those who wish to participate will need to be available for rehearsals during January and February.

Performance dates for “Avenue Q” are April 19-29. Rehearsals will begin in March and those who wish to participate will need to be available for rehearsals during March and April.

Williams said rehearsals will usually be held in the evenings with some weekend rehearsals.

Williams encourages everyone, even those with no experience, to audition.

“We love seeing new people at auditions,” she said.

For more information, call Williams at 507-434-7390 or email her at lindsey.williams@riverland.edu.

Unsung Heroes: To Miguel, everyone is family

By Roger Boughton, Guest columnist Unsung heroes are those who make a difference in the shadows of the community. They are... read more