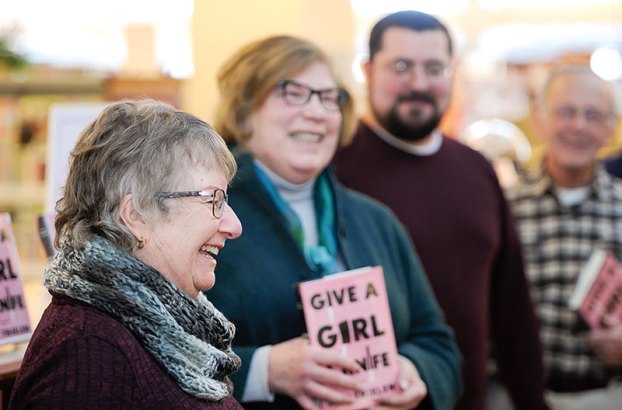 Peggy Benzkofer, a member of the Page Turners cracks up at a press conference Friday morning where the group introduced this year’s city-wide read. Eric Johnson/photodesk@austindailyherald.com

“Give a Girl a Knife,” a memoir by TV personality, chef and food writer Amy Thielen, is this year’s pick for Austin’s annual city-wide reading event sponsored by the Austin Page Turners. 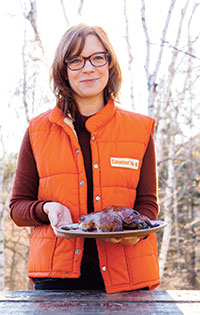 Amy Thielen is the author of ‘Give a Girl a Knife. Photo provided by Random House

The announcement was made Friday by the group that each year chooses a book by a Minnesota author to read. Similar events have been held each year since 2002, culminating with a visit from the author. Thielen will be in Austin on April 12.

Thielen, who lives just outside of her hometown of Park Rapids with her husband, visual artist Aaron Spangler, has worked as a chef, TV cook, and is a two-time James Beard Award-winning food writer.

While the Page Turners annually take suggestions for each year’s selection and probably read about 30 books before one is chosen, “we found this book very interesting and thought it would have a wide appeal in the community,” said Page Turners vice chairwoman Peggy Benzkofer.

“It’s a little different this year,” said Page Turner Bruce Richardson. “It’s not fiction, as it usually is; it’s non-fiction,” and not about cooking specifically.

Events surrounding Thielen’s appearance in April are still in the planning stage. Her talk will be held either in the library or at Hormel Historic Home.

Adult Services Librarian Courtney Wyant, also a Page Turner, said the annual pick is routinely the top circulating book in the library each year. For that reason, there are 30 copies now available for circulation at the library, and there are also a few copies of Thielen’s cookbook, “The New Midwestern Table.” Those interested in purchasing her memoir will find it at Sweet Reads Book Store.

Thielen’s book, said a review in the LA Times, “offers thoughtful insights into the life of the chef, highlighting that when, ‘you give a girl a knife,’ as her mom did when Amy was young, you pass on a legacy: that she will learn how to use it, and someday ‘consider that knife an extension of her hand, as wedded to her finger as a nail.’”

A graduate of Macalester College, Thielen earned her cooking stripes when she and her husband moved “off the grid” to a cabin in Two Inlets Forest, near Park Rapids. There she learned cooking and gardening, according to her biography, and those skills took her to New York City. There, she worked in exclusive restaurants with several celebrated chefs. She then wrote “The New Midwestern Table,” a cookbook, and served as host of “The Heartland Table” on the Food Network. She and her husband returned to Minnesota and their cabin – now fully “on the grid,” she reports — and she continues to be a contributing editor and writer to food publications and has been featured in several publications. She also is a frequent guest on radio and television programs. 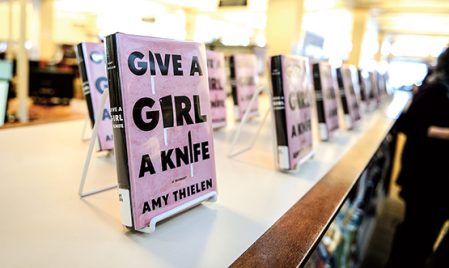 Copies of Amy Thielen’s book, “Give a Girl a Knife” are available at the Austin Public Library and are available to check out. Thielen is this year’s Page Turners city-wide read. Eric Johnson/photodesk@austindailyherald.com