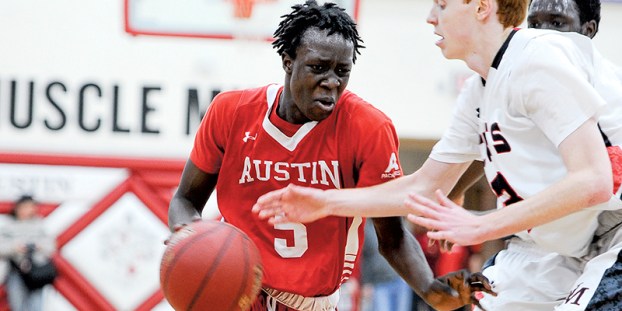 The Austin boys basketball team took Rochester John Marshall’s best shot in the first half and then the No. 2 Packers put the pedal to the metal in the second half as they ran away with an 80-64 win over the Rockets in front of a sell-out crowd in Packer Gym Saturday night.

Moses Issa, who had 19 points and seven rebounds, started the rally with a pair of three-pointers and Tate Hebrink, who had 14 points, added a three-pointer and a jump shot as well. 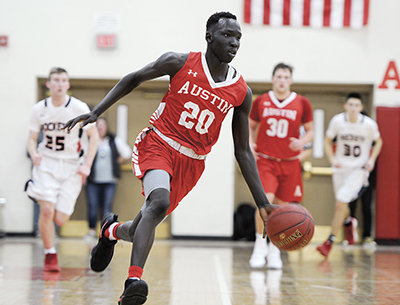 Austin’s Dongrin Deng angles for to the hoop off the break in the second half against Rochester John Marshall Saturday night in Packer Gym. Eric Johnson/photodesk@austindailyherald.com

“We knew we had to make changes at halftime and it paid off at the right time as always,” Issa said. “Even if they aren’t the team they were last year, it means a lot for our program to beat [JM].”

Austin was able to step up its defense on JM junior forward Matthew Hurt in the second half. Hurt had 24 of his 31 points in the first half as the Packers clamped down on him a little more in the second frame. JM, which is ranked No. 10 in Class AAAA, finished the game with 19 turnovers.

“On defense we did a better job of making them throw it over the top to Matthew in the second half. Once he catches it, you’re in trouble,” Austin head coach Kris Fadness said. “He’s really good. You’re not going to stop him. For awhile I thought he was going to score 70, the way it was going in the second half.” 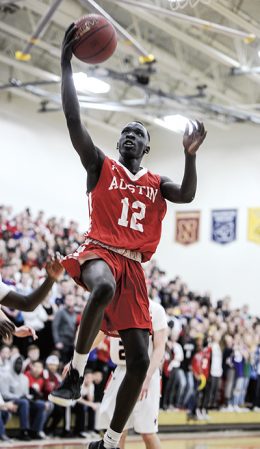 Austin showed its depth throughout the game as four players reached double figures in the win. Dongrin Deng came of the bench to score 10 points and he helped put an exclamation point on the victory as he came up with a steal and a jam late in the game.

While the Packers jumped out to an 11-2 lead, the first half was a back-and-forth affair after JM got Hurt going. Deng said Austin had to calm down and play its game.

“We just had to adjust. We came out a little bit flat,” Deng said. We picked up the pace, played our game and we picked up the win. The crowd got into it and I’m shooting the ball with confidence now. It comes easy.”

While Austin is atop the Big Nine standings, Fadness doesn’t want his team to start getting ahead of itself. He also was quick to point out that JM had played Northfield on Friday night, while the Packers hadn’t played since Tuesday.

“It definitely played to our advantage that they had a game last night and I don’t take that for granted. They’re going to be there at the end and we’ve got some tough games ahead,” Fadness said. “Owatonna’s getting their basketball legs under them and that’s going to be another war. This league is really tough this year.” 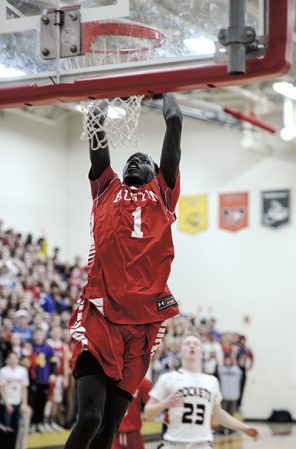 Austin’s Duoth Gach throws down in the first half against Rochester John Marshall Saturday night in Packer Gym. Eric Johnson/photodesk@austindailyherald.com 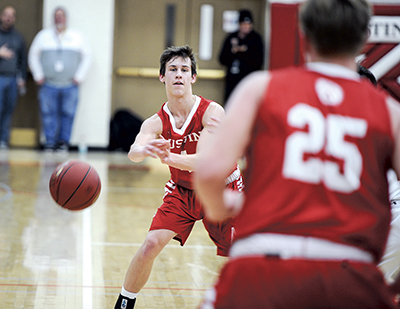