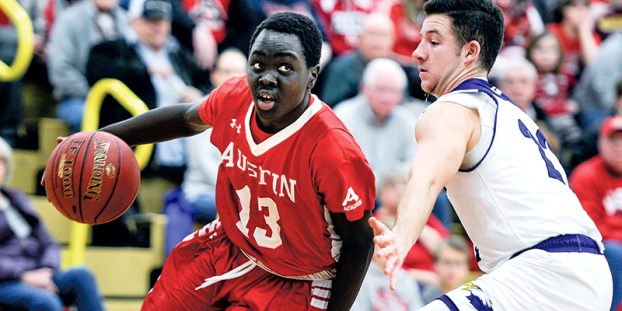 Pack on the run: Austin boys basketball team is off to a hot start

The Austin boys basketball team spent much of the first month of the season running and gunning and it has paid big dividends on the court. Austin has won all of its games by at least six points, including four wins by more than 20 points, as it has jumped out to a 9-0 overall start that featured big wins over Lakeville North, which is ranked No. 3 in Class AAAA, and Totino-Grace and Forest Lake.

The Packers have used their deep roster to put on a relentless full court press that has helped them turn a lot of their games into track meets this season. There have been highlight dunks, alley-oops and plenty of pull-up three-pointers — much of them coming in transition.

“We’ve been playing defense, we’ve been talking a lot and we’ve been moving the ball and making a lot of shots,” said Austin senior forward Duoth Gach, who recently scored his 1,000th career point. “It’s been fun.”

As well as they’ve played so far, the No. 2 ranked Packers are hoping their best is yet to come.

Austin head coach Kris Fadness hopes his team remains focused as it heads into a tough stretch of its schedule. The Packers will play five tough games in 11 days in a stretch that includes a game at Northfield Jan. 5, a home game against Mankato East Jan. 9 a game at Rochester Mayo Jan. 11, a showdown against Rochester John Marshall in Austin Jan. 13 and a game at Owatonna Jan. 16.

“The kids watch the polls and they read social media. It’s hard when they’re 16 and 17 years old to not believe the hype,” Fadness said. “We try to keep them grounded, but at the same time it’s nice to get that respect around the state. We’ve got to stay focused.”

While Gach, Tate Hebrink and Moses Issa have emerged as Austin’s big three, the rest of the team has brought its ‘A’ game as well. Medi Obang has emerged as sharpshooter who can play defense on the perimeter, Nyagoa Obany gives the team an athletic presence in the paint, Ngor Deng and Dongrin Deng have brought aggressiveness on defense, Logan Braaten and Luke Hawkshead have served as bruisers and will be counted against bigger lineups, and LaHenry Gills, Agwa Obang and Gavin Owens have all chipped in as well.

Braaten said the team has developed a selfless attitude, which has made the Packers successful.

“No one guy feels the need to shoulder the load. Everyone is kind of playing for each other,” Braaten said. “It’s kind of a tradition we have with whoever the next grade is where they’re going to try and make us better and we’re going to try to make them better. That way the program can keep going in the right direction.” 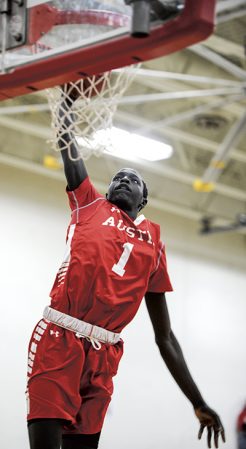 Austin’s Duoth Gach with one of several dunks this season against Red Wing in Packer Gym. Herald File Photo

Austin has been able to crank up the pace in nearly every contest this season and Fadness said that is a credit to the energy the guards have brought to the table.

The Packers have been rolling this season, but they’ve already seen a little bit of complacency kicking in as they had some struggles in a 72-60 win over Rochester Century Jan. 2. The Packers will have to continue to bring energy over the next two months before they can begin to think about the postseason.

“Last night’s game shows that we always have to be ready to play no matter what, even if they’re not the best team,” Hebrink said. “We’ve got some big games coming up and we’ll have to come out ready to play.”

FAST START FOR THE PACK

Funding renewed for program that helps seniors with chores

A program to help seniors with chores so they’re able to remain in their homes will again get funding from... read more