A 25-year-old man has been charged with second-degree murder in connection with a shooting in Rochester, Minn., that resulted from a car accident Sunday morning. 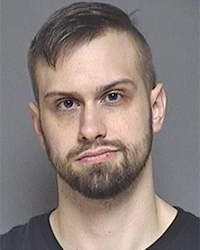 Prosecutors filed the felony charge against Alexander William Weiss of Rochester in Olmsted County after his first court appearance Wednesday.

According to the criminal complaint, Weiss was driving a Subaru bearing a bumper sticker that read “Gun Control Means Hitting your Target” westbound on 31st Street NE, when he saw a Chevy Cavalier moving too fast and crash into the curbside storm drain. Weiss stopped behind the Cavalier, and the Cavalier subsequently backed up and hit Weiss’s Subaru.

Weiss told police that a passenger and the driver got out of the car and became aggressive and confrontational toward him. Weiss claims the driver, identified by police as Mohammed Rahim, “got in his face and spat on him,” according to the complaint.

At one point, Weiss, who has a legal permit to carry, went back to his car to get his phone and his gun.

Weiss said then Rahim grabbed at his gun, so Weiss stepped back and shot Rahim once.

Police interviewed one of three passengers who said he and two other female passengers were in the Cavalier when the crash happened.

The witness, only identified in the complaint as Witness 1, said Weiss wished to fight. Witness 1 said the victim “got very close to Weiss, puffing his chest out with his hands down.” Witness 1 told police that Rahim told Weiss “I (expletive) dare you to do it” after Weiss threatened him with the gun.

However, Witness 1 said neither he nor Rahim touched Weiss, but acknowledged they were verbally aggressive.

Police also interviewed another witness who was driving by at the time and said she saw Weiss pull the gun from his pocket, raise it and shoot Rahim. She noted that Rahim was not touching Weiss, nor raising a fist or advancing toward him.

Olmsted County Attorney Mark A. Ostrem said self-defense will likely be raised, but there are two things to keep in mind.

“One, you have a duty to retreat and two, you can only use the level of force that is being used against you,” he said. “Based on all the information we know, all the interviews, we feel that this is the appropriate charge.”

A second-degree murder conviction carries a potential prison sentence of 3 to 40 years.

Vikings deep in playoffs, thanks in part to diligent Diggs