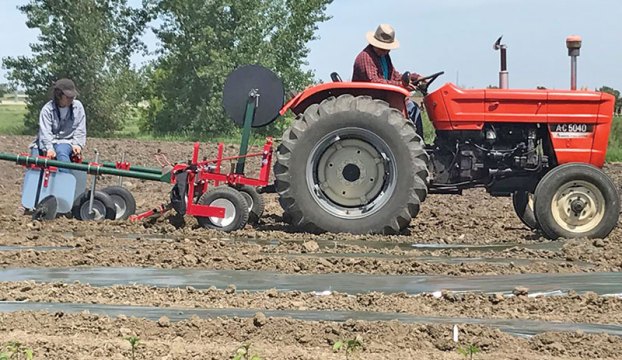 About this series: Mary Turck, a staff member at the Immigrant Law Center of Minnesota, writes about new Austinites. A third will publish tomorrow.

Austin resident Cira Paz Valbuena’s family raised their own food when she was growing up in Mexico. Now, she’s transplanted that tradition to the Midwest.

“I always loved farming,” Valbuena said. “All my life, I was used to eating fresh vegetables.”

About 16 years ago, when Valbuena’s daughter, Julieta, enrolled in preschool, Valbuena heard about garden plots next to Woodson Kindergarten Center. She signed up quickly and started out growing food for the family. However, she couldn’t stop there.

Her’s is a family of four, but she raised enough food for 20. Four or five years ago, Valbuena saw a notice about learning to raise food for sale to others. She was ready. The whole family joined in the new farm project. Since then, their 0.8 acre plot has expanded to include almost seven acres in two different locations.

They are growing on only three of the seven acres, Valbuena’s husband, Guillermo Martin said. Even with a tractor, growing fresh vegetables is labor intensive and time-consuming.

“Summer doesn’t wait,” Valbuena said. “It is heavy work, and you have to like what you are doing to do it well. Hard work doesn’t scare us away.”

She adds, teasing, “Except for Julieta!”

She and Julieta both laugh. The whole family – Martin, Julieta and her brother  – now work with Cira in the small farming operation they named La Sureña.

Their crops include green beans, jalapeño peppers, Roma tomatoes, bell peppers, cilantro, tomatillos, cucumbers, and dragon tongue beans. In Austin, HyVee is one of La Sureña’s customers, along with some local restaurants and families.

Martin still works full-time off the farm, at International Paper. Growing up in Texas, he had “no farming background, and farming was the last thing I ever thought of doing.” He prefers dealing with “paperwork, certifications, all that stuff.”

Martin credits the Latino Economic Development Corporation (LEDC) and the Austin Area Minority Business Project for guiding him through the maze of regulations and procedures necessary for farmers who grow vegetables for the commercial market. Some rules seem obvious: washing produce before sale, keeping records of any fertilizers or herbicides used. Some are less obvious: “If an animal goes into the field,” he said, “you have to find where he came in and try to close that spot.”

Martin also keeps records to assess which plants and varieties produce the biggest harvests and the highest return on investment.

La Sureña is one of eight member farms in the Shared Ground cooperative, which helps to market the produce they grow. Besides marketing to stores and restaurants, Shared Ground sells Community Supported Agriculture (CSA) shares. Someone who buys a CSA share gets a weekly box of fresh produce during the season.

Shared Ground and LEDC open new horizons through classes and workshops on topics such as high tunnels, irrigation lines, pollination and cover crops. La Sureña is using a mixture of oats and wheat as a cover crop to improve the soil.

Thinking about the future, Valbuena says she would like to own land instead of renting, and to have all of the land in one place so they don’t have to travel back and forth from one plot to another. Maybe some chickens, she said, and “maybe a pony for Julieta.”

Julieta represents the youngest generation in the family farming operation. While her mother and grandparents came from the state of Guerrero in Mexico, Julieta grew up in Austin, and likes the diversity of the community. She fits in work in the fields around her other two summer jobs at Subway and the Assisted Living Center. During the school year, she’s away from home, a junior at Knox College in Illinois.

When Julieta thinks about the future of the family’s farming, she sees getting more land, having a more organized operation, and maybe expanding deliveries. Apart from that, she says, it would be good to get more involved in the community and “maybe to have classes to teach people about food. Food brings people together.”

Mary Turck is a freelance writer and editor, whose past work includes work as a lawyer, and teaching writing and journalism courses as an adjunct faculty member at Macalester College and Metropolitan State University. She began doing communications work for ILCM as an independent contractor in 2017.

After talking to a gathering at Austin’s Pizza Ranch on Tuesday about things such as taxes, school choice, illegal immigrants,... read more