Marvin W. Lenz, 83, of Rochester, Minnesota, died on Tuesday, Jan. 9, 2018, from complications of Parkinson’s Disease at Samaritan Bethany Home on Eighth in Rochester, where he had been a resident since 2014. 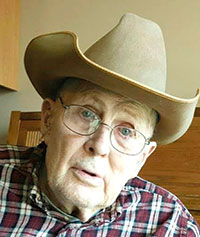 Marvin Wesley Lenz was born on July 13, 1934, in Clear Lake, Iowa, to Clarence and Margaritte (Galloway) Lenz. He moved with his family to Lyle, Minnesota, where he grew up on the family farm and attended Austin schools, graduating from Austin High School in 1952. He then attended Hamline University in St. Paul, Minnesota. He enlisted in the U.S. Army in 1957, serving until 1963, including duty as a paratrooper. Marvin was married on May 28, 1956, at the United Methodist Church in Austin, Minnesota, to Lois Y. Dunfee. Following Marv’s discharge, the couple lived in Mankato, Minnesota, where Marv received his bachelor’s degree in education.

He taught math in Claremont, Minnesota, before the couple moved to North Platte, Nebraska, where they both were employed as teachers and Marv began his part-time career as a ranch hand, on horseback, for a cattle ranch operation. They moved to Rochester, where they made their home and lived for over 30 years. Marv was employed as a math teacher in the Stewartville School District 534 for 23 years and Lois was employed in the Rochester School District for over 30 years as a kindergarten and elementary teacher. Marv and Lois were longtime members of the United Methodist Church. Following their retirement, they enjoyed time spent on their ranch in rural Rushford, Minnesota. Lois died in April 2004. They both were true outdoors people. Marv spent summers in Wyoming during his teaching years, working on horseback on ranches and Lois spent winter months working with the ski patrol in Lake Tahoe, Nevada, after retiring. Marv was an avid baseball player, excelling in high school and as a minor league player in Nebraska and was a Minnesota Twins fan. He was a musician who played the guitar and dobro, sang cowboy tunes and participated in many bluegrass events in Southeast Minnesota. He loved animals, horses, cattle and dogs, especially their beloved border collie, Melba.

Marv is survived by two brothers, Lewis (Nancy)Lenz of Richmond, Minnesota, and Wayne(Ruth) Lenz of Harmony, Minnesota; nieces and nephews. Marv was preceded in death by his wife, Lois; his parents; and his brother, Jerry Lenz.